Columbia Records and Legacy Recordings, the catalog division of Sony Music Entertainment, are celebrating the first 50 years of Billy Joel’s legendary career with today’s release of Billy Joel – The Vinyl Collection, Vol. 1, a definitive 9LP boxset library chronicling Billy’s evolution as a songwriter, performer and recording artist during his rise from obscurity to international superstardom in the 1970s.

Two previously unavailable live tracks–“New York State of Mind” and “Everybody Loves You Now”– have been released as a digital bundle, providing fans a taste of the newly released Live at The Great American Music Hall -1975 disc in The Vinyl Collection, Vol.1. Enjoy these Billy Joel live tracks HERE

In advance of the release of The Vinyl Collection, Vol. 1, an official new animated music video for “Scenes from an Italian Restaurant” (a sophisticated musical suite–and perennial crowd-pleasing fan favorite–from Billy’s The Stranger) was created for #50YearsofBilly by Lightborne Communications and premiered online September 30, 2021. Watch HERE

At long last, as part of the #50YearsofBilly celebration, Billy’s YouTube channel is presenting “Everybody Loves You Now,” the artist’s first official promotional video, lensed in 1971 to showcase a core song (and b-side to the singles “She’s Got a Way” and “Tomorrow Is Today”) from his solo debut album, Cold Spring Harbor. Watch HERE

The Vinyl Collection, Vol. 1 brings together the artist’s first six solo studio albums (Cold Spring Harbor, Piano Man, Streetlife Serenade, Turnstiles, The Stranger, 52nd Street) with his first live album (Songs in the Attic) and an exclusive pressing of Live at The Great American Music Hall – 1975, a previously unreleased concert recording available for the first time in the boxset as a double 12″ vinyl album. All titles have been sourced from the original album tapes and prepared by Ted Jensen at Sterling Sound. The boxset includes a 50+ page booklet highlighting Billy’s early career through archival photos, an essay by Anthony DeCurtis, Billy’s personal observations and insights on his songs and albums, and tributes from his fellow musicians, artists and celebrities.

While “New York State of Mind”/”Everybody Loves You Now” are available as a digital bundle, the Live at The Great American Music Hall -1975 LP is currently exclusive to the boxset and not available at digital outlets. 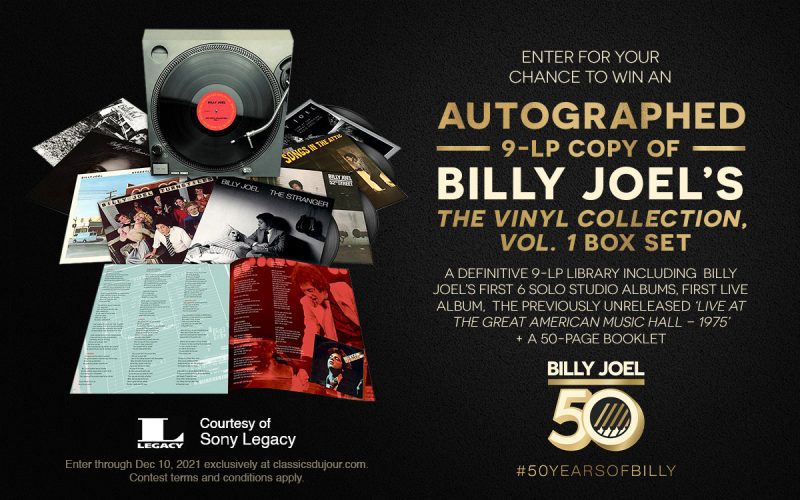