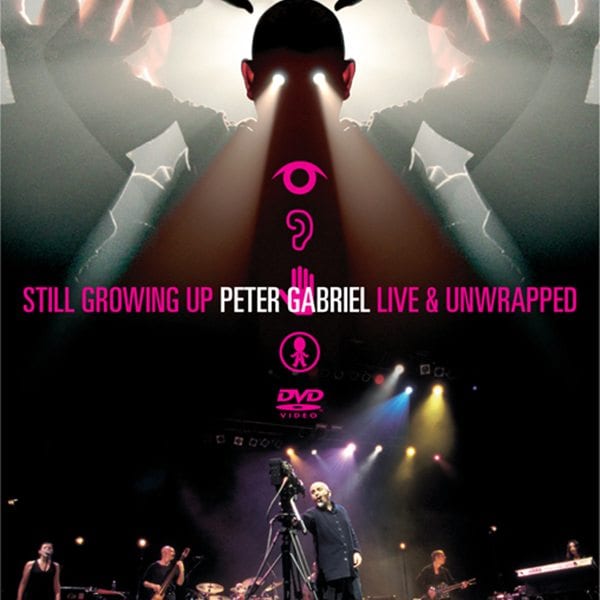 "The Feeling Begins"
"Red Rain"
"Secret World"
"White Ashes"
"Games Without Frontiers"
"Burn You Up, Burn You Down"
"The Tower That Ate People"
"San Jacinto"
"Digging in the Dirt"
"Solsbury Hill"
"Sledgehammer"
"Come Talk To Me"
"Biko"

The “Growing Up Live” concert film was recorded on the tour of the same name from 2002/3 and boasts key tracks Sledgehammer, In Your Eyes, Solsbury Hill, Digging In The Dirt, More Than This, Red Rain, Growing Up, Mercy Street, Here Comes The Flood and more. “Still Growing Up Live & Unwrapped” includes the concert film of the Still Growing Up tour from 2004 and the “Unwrapped” film (both shot in standard definition), which give a more intimate look at Peter Gabriel on tour and explore the world behind the songs featured in the shows. The Blu-ray+DVD set has all the material from these three DVD discs included on one Blu-ray disc and one DVD. Also included on the Blu-ray disc is the Family Portrait film. Full content details on all formats are overleaf.

In 2002 and 2003, following the release of his album “Up”, Peter Gabriel went on the road with his “Growing Up” tour, once again collaborating with production designer Robert Lepage to create a spectacular and theatrical live experience. The tour took in thirty-two cities across the USA, Canada and Europe with this concert film, directed by Hamish Hamilton, being shot over two nights at the FilaForum in Milan in May 2003 with Peter Gabriel and the band performing “in the round” at the centre of the arena. Filmed in high definition, this was originally released on DVD in 2003 but never on Blu-ray. The DVD is now being reissued and the concert is being released on Blu-ray for the first time.

“Still Growing Up Live & Unwrapped” is taken from the “Still Growing Up” tour of 2004, which took Peter Gabriel and his band into smaller and more intimate venues in contrast to the large arenas chronicled in the “Growing Up Live” film. Award-winning director Hamish Hamilton reunites with Peter Gabriel for this concert film.. The ‘Unwrapped’ film sees Anna Gabriel take over the director’s chair with the collaboration of Hamish Hamilton. A simpler approach suggested a different set list and Peter, Hamish and Anna were determined that this should be filmed in a very different style. It shows Peter Gabriel as many of his fans love to see him, just playing the music.

“Growing Up Live” / “Still Growing Up Live & Unwrapped” are important films that capture one of our most innovative and best loved artists at his very best.