An Introduction to Syd Barrett 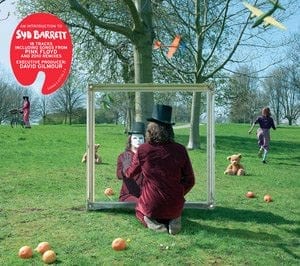 On November 9, Capitol/EMI released An Introduction To Syd Barrett, a brand new collection bringing together for the first time the tracks of Pink Floyd and Syd Barrett on one compilation.

David Gilmour, who originally worked on Syd Barrett’s two solo albums, as co-producer of The Madcap Laughs and as producer of Barrett, is the executive producer for the album. Damon Iddins and Andy Jackson at Astoria Studios have remixed five tracks including ‘Octopus,’ ‘She Took A Long Cool Look,’ ‘Dominoes,’ and ‘Here I Go,’ with David Gilmour adding bass guitar to the last track. Pink Floyd’s ‘Matilda Mother’ also receives a fresh 2010 Mix.

Brand new artwork, including a 20-page booklet with brand-new graphics and all lyrics, was provided by long time Pink Floyd associate Storm Thorgerson and his estimable studio.

Storm Thorgerson on the Album Cover:

“I think the principal thing about Syd which we wanted to represent or echo in the album cover was the richness and spontaneity of Syd’s imagination. Notwithstanding the many theories and stories of his complex personality, erratic behaviour and subsequent decline, however sad and difficult the life, the creative output was plentiful and incandescent for a time, vivid and poignant by turns. This basic aspect informed the idea to ‘illustrate’ the songs, dedicate a page to each lyric and be, simply, ample and colourful.

Sometimes the illustrations were intended to be straightforward, at others more tenuous; some are graphic, some more pictorial, in order to reflect (albeit continuously falling short) the mischievous, essentially quirky quality of Syd: often a bit weird, often disarmingly direct – a bike is a bike, a cat is a cat, but their characters are imbued with unexpected color and a touch of lightness, deft, obvious nearly, but seemingly revelatory, both catchy and magical;

I got a bike you can ride it if you like
It’s got a basket and a bell and it looks good.

Three lead images, including the front cover, attempt to describe Syd and his work – the mirror that isn’t a mirror, reflections which are both insubstantial yet revealing, are they imagined or real? meaningful or fleeting? a virtual or transient scenario like Syd’s ‘hovering twixt fairytale and disturbance.

A swan, representing creativity, escaping explosively from the strait-laced confines of upbringing and education (the school desk) seemed an appropriate representation of Syd’s burgeoning talent.

The feather trees refer possibly to 3 stages in Syd’s development – firstly the exuberance of youth, secondly success with Floyd, and thirdly the solo years dogged by uncertainty and a growing darkness. This illustration began as 3 birds but they flew away leaving feathers, whose fragility and elegance suggested an autumnal sadness, a sadness we all experience for the loss.”