TOTO XIV is a realized vision three plus decades in the making exhibiting world-class musicianship, masterful arrangements, topical lyrical commentary, and melodies that the collective genius of Lukather, Paich, Porcaro, Williams and their assembled band-mates bring to life. TOTO XIV is the band’s first album of new material since 2006’s Falling In Between. However, the band personally considers the new album to be the true follow-up to TOTO IV, which made the band global superstars.

Keyboardist Steve Porcaro reveals, “This is opposite of going through the motions. We are treating this like it is TOTO V, our follow-up to TOTO IV. We just want to be the best version of ourselves that we can be. Be true to ourselves and make the best music we can. Entertain people which is what we were put on this Earth for.” Keyboardist David Paich reflects, “I think of TOTO as a unit and a band that carries a responsibility when it goes out there in to the public consciousness. There is so much negativity and darkness that I think you have to be as Quincy Jones puts it, ‘beams of light that blast through the darkness’.”

As they began the process of a return the studio, all of the principle long-term members brought their A-game to the table. Guitarist Steve “Luke” Lukather offers, “When you put us in a room, and everybody brings in their pieces, the next thing you know it all fits together. Everybody’s performances are top notch. We are really bringing our best out, forcing ourselves to make personal best choices, what’s best for the music. I’m really excited to hear what people think.” Singer Joseph Williams adds, “We are talking about a band where everybody is a writer, and everybody is a lead singer, and everybody is a player. All involved brought this trio to the table where it could just live on its own.”

Founding bassist David Hungate returns to the fold, about whom Luke simply offers, “No one plays like David Hungate.” Drums were performed by Keith Carlock who’s commitments to Steely Dan prohibit him from participating in the 2015 World Tour. Shannon Forest will be behind the kit, who was a part of the band’s 2014 North American run. Luke offers, “Shannon is a world class drummer and we are honored to have him back with us.”

The sessions were co-produced by CJ Vanston, who Paich looks upon as, “everything a producer is supposed to be and more – a musicians producer.” Vanston states, “There have never been better musicians on the planet, especially in a band together. This is an amazing record and I am completely thrilled to be a part of it. This is a dream job for me.” Porcaro offers an additional thought stating, “I think the band is hit upon a very healthy creative tension for this project. I’m very excited about it.” For Williams he reflects, “Just imagine being able to stand on stage in front of enormous crowd of people, and you are playing great music with the best musicians in the world, and you look around, and they are some of your best friends in the world. It’s the best feeling any person could have.” For Porcaro he shares, “It is kind of hard to find words of what it means to have a smile on your face to go to work every day and we have the fans to thank for that – so thank you.” 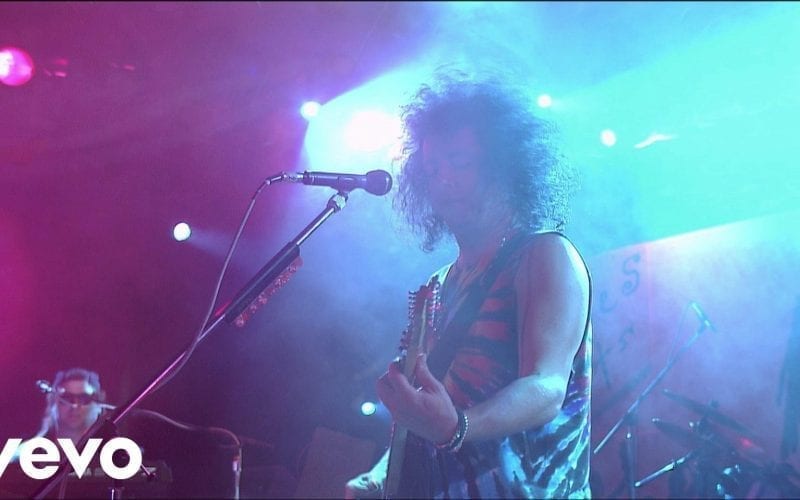 Watch Toto Perform “On The Run” Live at Montreux, 1991