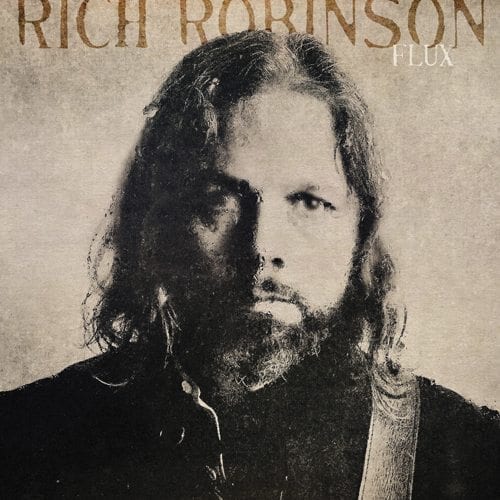 This is the moment 2016 has been building up towards: throughout the year, Eagle Rock Entertainment has released expanded, re-imagined versions of Robinson’s solo albums, including Paper, Through A Crooked Sun, and Woodstock Sessions (on CD and digitally). These re-issues served as a fitting lead-up to Flux.

With Flux, Robinson presents his most accomplished solo album to date – 13 new, original songs that draw deeply on his diverse roots. A blues-rock odyssey straight from Robinson’s soul, the guitarist returned to Applehead Studios in Saugerties, NY, the recording facility that has become his creative hub. Nestled away within Woodstock’s famed artist enclave, Robinson’s work at the studio has yielded Woodstock Sessions, The Ceaseless Sight, and now Flux. The entire writing and recording process, explains Robinson, is the driving force for his creativity. “I love being in the recording studio,” states Robinson simply. “It fuels the desire to create within me. I enjoy watching it unfold. Each development fires another idea and in the end, you have this organically created song that seemingly came out of nowhere. It brings me such joy and peace. It never ceases to amaze me.”

Flux showcases a rich variety of tempos, tones, and guitar tuning, ranging from the vibrant swagger Robinson first popularized with the Black Crowes to the rich, evocative allure evident in songs such as “Sleepwalker” and “Ides of Nowhere.” “These were great examples of songs transforming from little ideas I originally had. Both just came alive when I had the band with me in the studio. They weren’t anything like what I had first envisioned. It was exciting to experience that process.”

Robinson’s creative process within the recording studio shaped such standout Flux tracks as “Music That Will Lift Me,” the album’s first single. “I am always excited by the creation itself,” Robinson explains. “I used the studio to specifically write that song. I had these parts written but it started to unfold once I got to Applehead Studios. “I later wrote the lyrics in Nashville and it had really evolved into something special.” Brimming with redemptive spirit, Robinson’s vocal and guitar work shine throughout. Joining him on the track is Charlie Starr of Blackberry Smoke, who lends guitar alongside Robinson’s own.

Backed by musicians Matt Slocum (keys), Marco Benevento (keys), Danny Mitchell (keys) Zak Gabbard (bass), Joe Magistro (drums / percussion) and vocalists John Hogg and Danielia Cotton, Robinson transports the listener with a powerful collection of music. From the groove-laden feel of opener “The Upstairs Land,” the kick of funk via “Shipwreck,” and the gospel swell of “Everything’s Alright,” to the emotional build-up of “Life” and the hearty stomp of closing track “Sleepwalker,” Flux ebbs and flows through moods, delivering a varied listener experience.

A creative soul through and through, Robinson is not only presenting Flux this year, but his artwork was recently displayed at both Morrison Hotel Gallery in NYC and Truth North Gallery in Canada. In May and June, Robinson will serve as a special guest guitarist for Bad Company. Robinson and Bad Company lead vocalist Paul Rodgers recently met and collaborated on a tribute to Jimmy Page. Rodgers was so impressed with Robinson that he asked him to take part in this special Bad Company US tour. Robinson will also embark on an extensive US solo tour kicking off in July. Additionally, he recently collaborated with Zac Brown on his new album and is also featured on “The Way Home” — the final track of producer David Cobb’s concept album Southern Family – with gospel choir the Settles Connection.