“We’ve never toured with them, but we’ve played with them off and on throughout our career. I know musically it works. Anytime we play together it’s an awesome show. Collective Soul are great showmen. They have a fantastic catalog. I’m really pleased that it finally came together.”

The “it” Gin Blossoms lead vocalist-rhythm guitarist Robin Wilson is referring to is the upcoming Now’s the Time Tour featuring the two perennial crowd-pleasing hit makers. The 15-city run of shows gets underway May 25 in Atlantic City and wraps June 16 in Rockton, Illinois. Stops along the way include Greensboro, Baltimore, Morristown, Hampton Beach and East Providence. Tickets are on sale now. Click here for a full list of dates.

Combined, Gin Blossoms and Collective Soul have a list of hit songs that are staples on radio nationwide. Now’s the time to buy tickets, or risk being consumed with jealousy that friends and family did.

Let me kick it off my throwing it back a little bit, Robin. We had lots of great times with you and the Gin Blossoms and Collective Soul on many a Rockline show that I produced from ’92 to ’97. So, we are reconnecting here. It’s good to talk to you again.

Yeah, no doubt. Well, thanks for helping promote our little rock band. I appreciate it.

Absolutely! Let’s kick off the conversation with this: how would you describe the period between (the Gin Blossoms 1992 album) New Miserable Experience and (1996 album) Congratulations I’m Sorry?

Well that was a pretty hectic time. We were virtually on the road all the time. So much was happening. The band was taking off and you’d go home every once in a while, and you’d go to the old sandwich shop and your song would be playing on the radio. You’d pull into town for the first time in a year and you’d hear on the radio: (in exaggerated DJ voice) “Coming to Veterans Memorial Coliseum, the Gin Blossoms!” You grow up hearing ads like that on the radio for Kiss, and all of a sudden, it’s you. But mostly it was just work. Work, work, work. Constant travel, interviews, concerts and writing songs. It’s an intense amount of pressure to be under, but we rose to the challenge. We came up with a couple of great songs at that time.

Pun intended: proving that you weren’t a quitter, when the band broke up in ’97 you went on to form the Gas Giants (who scored a hit with the song “Quitter”) before regrouping in 2002. So, was the reunion then a case of what doesn’t kill you makes you stronger?

Something like that. We just got to a point where we were getting offers to play. And, so part of it was motivation to feed our children. At the same time, the music I was writing lent itself to Gin Blossoms. We started talking again, and our bass player Bill (Leen) – he’s always been the heart and the conscience of the group – and Bill said if we’re gonna do this everyone is allowed to have their own Gin Blossoms experience. And I was moved by that and motivated to kinda make it work.

One more kinda historical question for you before we move forward, because obviously we’re trying to sell tickets for the upcoming tour with Collective Soul with this conversation. Last year, you guys released your sixth studio album Mixed Reality, with the opening song “Break.” In light of the band’s ups and downs the line that jumps out at me is, “We don’t always want what’s easy/never is enough.” Is it fair to say that sums up sort of the history of the Gin Blossoms?

Yeah, you bet. The Gin Blossoms are a family. It’s been a pretty tumultuous ride and all the struggles and compromise and joy that you get from a family is pretty much my experience with Gin Blossoms. Yeah, that line can apply. No doubt about it. But when I wrote the song, actually, it was my mission statement as a father. That’s what was on my mind. But I wanted it to be something universal. Of course it was a huge thrill to go record with (producers) Mitch Easter and Don Dixon. You know, you start out as a kid in a record store listening to R.E.M. and The Smithereens. Then you flash forward into the future. Recording with those guys we definitely sorta stepped it up a little bit in terms of our performance. We were trying to impress them, and yeah, mission accomplished.

Yeah, definitely! SiriusXM just released your cover of Radiohead’s “Fake Plastic Trees.” What is it about that track that made you want to put your spin on it?

It’s a song I’ve been covering in my acoustic realm for a number of years. I’m always trying to challenge myself to get the band to do some new covers. That one was on my mind when we were rehearsing for the new tour and I threw that out there as a suggestion. I was actually pretty shocked when they all just kinda shrugged and said, yeah, we can do that. It’s real easy for us to dig into a Tom Petty song or something like that. With “Fake Plastic Trees” it definitely takes us out of our comfort zone. It’s just such a beautiful song. It’s really a landmark for that great band Radiohead. And, yeah, it was cool!

We’ve never toured with them, but we’ve played with them off and on throughout our career. And we get along pretty well and there seems to be a degree of mutual respect. I guess their schedule was such that it worked, and I know musically that it works. Anytime we play together it’s an awesome show. Collective Soul are great showmen. They have a fantastic catalog of music. They’ve really been perhaps the most consistent band of our generation as far as getting to their level and staying there. I’m really pleased that it finally came together.

Yeah, it’s gonna be a great double bill. Tickets are on sale now, and both bands are offering their fans VIP packages. What do those packages include?

I’m not entirely certain what exactly it’s gonna be when we’re on the bill with them. When we do it ourselves, you get a bag full of merchandise and autographed poster. We’re including a download card for our new record, a limited-edition backstage pass. And then we do a soundcheck where the VIPs come in and they get to see us rehearse. I typically go up and do a song or two by myself on acoustic guitar, and then my bandmates join me and we do a couple more songs.

Speaking of perfect packages, what can you tell us about the upcoming New Miserable Experience Live DVD/CD set?

We recorded it at the House of Blues in Chicago on our last tour. It’s gonna be a good snapshot of the tour. It’s a great representation of a live Gin Blossoms show during that tour.

So, let me ask you this question that I often do in these conversations, and that is the proverbial Beatles on Ed Sullivan moment. Was there a song that came on the radio, an album that you heard, a concert that you went to, where afterwards the lightbulb came on and you said this is what you wanted to do for the rest of your life?

Actually, yes! It happened when I was eight years old. I was in the third grade, growing up in Tempe, Arizona and it was a Friday night of sleeping over at the neighbor’s house. We’re all camped out on the floor in our sleeping bags and we stayed up really late to watch The Midnight Special. That was the night that Queen debuted the video for “Bohemian Rhapsody.” As you say, the lightbulb went off. Every neuron in my brain was firing. All my geek streams were vibrating. I knew right then that I wanted to be a rock singer. I’ve been on this path ever since. I’m very, very fortunate that I was in the right place at the right time and I had the required skill set. Finding myself in Gin Blossoms – it’s corny to say destiny – but it really does feel like I’m exactly where I’m supposed to be. It’s really incredible to write a song in your bedroom and then 20 years later you’re thousands of miles from home and there’s 500 people singing your song back at you. We’re very fortunate that we get to tour with bands like Collective Soul and we’re in a position to make live records at the House of Blues in Chicago when we have a sold out show. It’s really special. I’m really proud to be a part of the Gin Blossoms.

So, I wanted to close the conversation with a fun final question. I’m pretty certain that you’ve already answered it, but I’ll ask it and you’ll know why I’m pretty certain. Hypothetically, of course: if both R.E.M. and the Traveling Wilburys reunited and played live on the same night in Tempe, which show would you see?

I would probably go see R.E.M. That’s a tough call, of course. And if it was a choice between Tom Petty and the Heartbreakers and R.E.M. it would be an even tougher call. Lets hope The Darkness isn’t playing in town on the same night because then I wouldn’t know what to do. I think my choice would be R.E.M.

I’ll tell you, I was ping-ponging back and forth in my head with the last question between the Traveling Wilburys and Petty. Alright, well thanks again.

Thank you! Yeah, it’s been nice chatting with you. And glad I didn’t crash my car on the Wantagh Parkway on Long Island.

Me, too because that would’ve been the headline!

It would have been. Mid-level singer dies in car crash. Yeah, thank you very much. I appreciate you helping promote the shows and the band and your thoughtful questions. It’s been a good time, so thanks a lot. 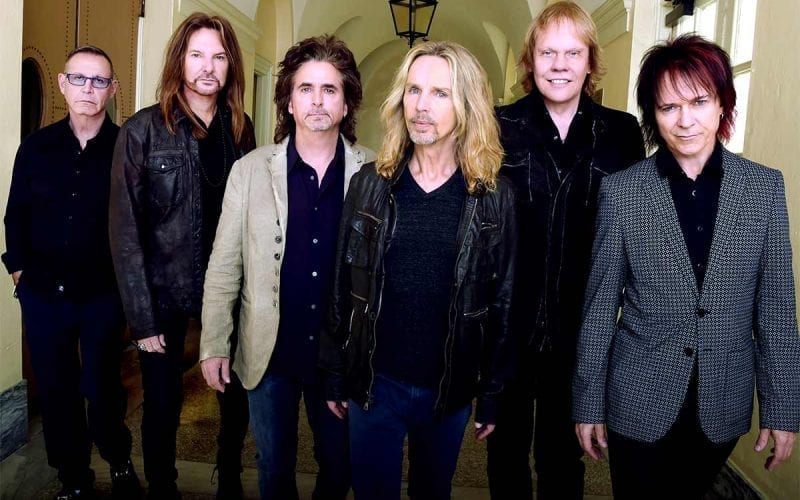 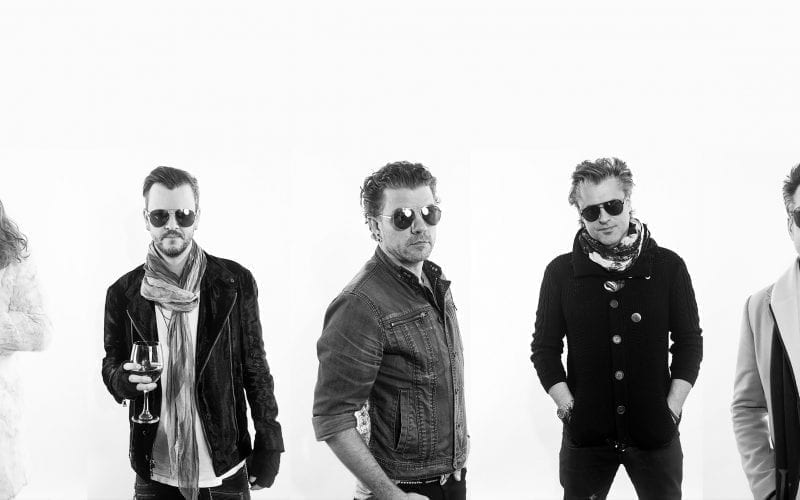