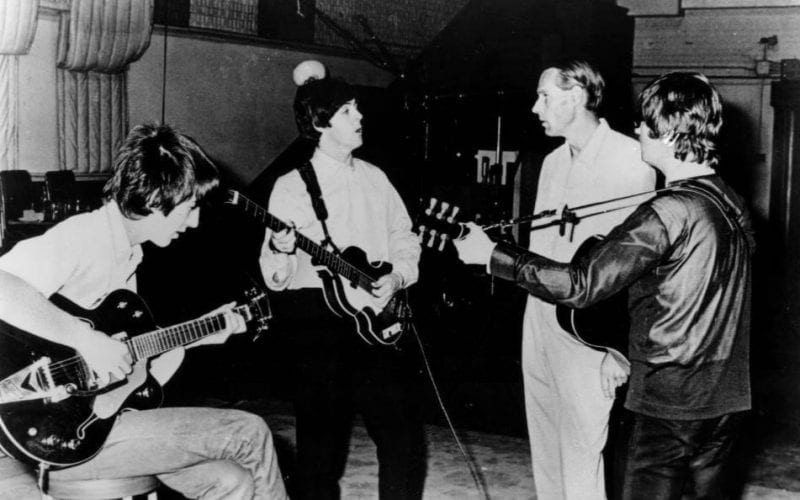 With the passing of Sir George Martin I feel compelled to write about something that I often talk about with colleagues—why the music of yesterday somehow seems to be more meaningful and has more staying power than a lot of the music made today.

Let’s first talk about the artists and their process and then discuss production and great producers like Sir George Martin.

I happened to tune into The Voice television show the other night.  I really don’t like the show very much as to me it’s a watered down version of American Idol (which I had no use for either, honestly).  It’s not that the contestants have no talent, they do.  It’s just that to me a lot of people can sing, but the artists that last a long time, seem to be the kind that write their own songs, tell their own stories, and have more depth inside.

On The Voice the artist who was singing was actually really good, but when asked who his influences were he said, Justin Timberlake, Sam Smith, and Bruno Mars.  Now, don’t get me wrong, these are all talented people, but we have to remember that they are emulating artists before their time, and a little something is always lost as the torch passes from the original to the next generation and the generation after that.

I have watched over the years as artists have followed other artists, emulating them in the beginning until they find their own voices, which is quite natural of course, and is the way of the music world.

I have a good friend who was once visiting Muddy Waters in Chicago and asked him where the music came from.  Muddy took him to his backyard and into his garden.  He put his hand in the dirt and began to roll around the clumps of soil in the palm of his hand.  “This,” he said.  “This is where the music comes from.”

The original black blues artists came from cotton fields.  Toiling in the sun they would make up songs or “field hollers” that they would sing or yell and others would repeat or reply in kind.  These songs were about true feelings, real life situations.

Rock and roll is essentially just the blues speeded up.  It’s the same three chords in a 1, 4, 5 progression (musicians who read this will more fully understand).  In the early years, bands like the Rolling Stones and later Led Zeppelin mostly copied songs, sometimes note for note, and even the singing style of the original blues artists like Muddy Waters.  They got the essence of the songs, the message, and the artists themselves.  In later years as other artists emulated The Stones, Beatles, and Zeppelin, etc., they became more watered down versions, and the magic, the mystic, and the mojo was harder to find.  It’s kind of like when you play “Telephone”—someone starts but by the time the word or sentence gets to the last person it’s totally changed and sometimes unrecognizable.

In rock most of this phenomenon notably took place when MTV started.  Kids would look at the bands on MTV and say, “Oh, I could do that.”  Instead of looking farther back into music history (many not even bothering to become proficient on their instruments) they just copied the licks they heard, dressed up, and tried to make it in the music biz.  As the music business became more about the money and marketing these bands became successful by creating intriguing videos.  Out of that came the “Hair Band” movement featuring bands like Motley Crue, Poison, Winger, and Warrant.  Hair seemed to be more important than chops (amassed proficiency gained over time from study and practice) until authenticity showed itself again (thank God) via the Seattle movement with bands like Soundgarden, Nirvana, Alice In Chains, and Pearl Jam.

The way I see it, mostly the difference between today’s music and yesterday’s is simply this.  If you look at all genres of music from rhythm and blues, to country, to rock, etc., the stuff of the 60’s and 70’s (of course with exceptions) seems to register in our hearts more deeply than music post 1990 because somewhere along the line in this game of “Telephone” a lot of artists have neglected to walk back over the bridges of the past to mine the real thing, electing instead to emulate what is in front of them at the time.

It is the same in the world of music production.  Back in the day great producers like Sir George Martin, Tom Dowd, and Rick Hall (you MUST SEE the documentary “Muscle Shoals”), brought out the best in the artists they recorded but it all came from human emotion.  In today’s world, often music and songs start with a beat created electronically.  So, from the very start, the artists have to fight to find emotion in their recordings because it doesn’t exist organically.  It’s not the same as having a real drummer who is “feeling” a groove, and a human one at that.  Or perhaps letting a keyboard riff become the basis of a song before the drummer even figures out what beat is correct.

Many of the original bands of the 60’s and early 70’s actually built sections into their live performances for improvisation where they could just let the music and vibe flow as they listened to, and played off one another, letting the result propel them, and moreover, their audiences into shared euphoric experiences.

The Grateful Dead and The Allman Brothers were most known for it, but other bands like Santana, The Stones, The Who, Pink Floyd, and even pop bands like Journey all made a space in their live performances to just feel the music of the moment and jam to take themselves and their fans to emotional heights.

My point is, what Muddy Waters said is true—real authenticity, the kind that will remain with us, comes from the earth and mining our human emotions.  That is how we relate to one another as human beings.  That is why those musical messages from years ago still remain and are important to us to this day.  That is why when folks hear Mowtown music they get big, warm, knowing smiles on their faces and that is why Classic Rock radio still commands great ratings in 2016.

To finish my point, I would also like to call attention to this year’s Super Bowl half time performance.  Is anyone still talking about it?  Did anyone talk about it even two days after the game?  Coldplay is cool, their songs touch us, but they are an intimate band and had no place trying to be the centerpiece of that show.  And all the extra help from Beyonce and Bruno Mars didn’t matter one bit.  It was a non- issue to be kind.  The NFL showed how distanced they are from understanding music and the kind that can really touch people the world over.

The following is an open letter to the NFL and CBS Network from Carlos Santana that says it all.

Dear NFL/CBS….I would like to take this opportunity to thank you both for including me as a part of your Super Bowl entertainment. I do feel compelled to point out to you that the Halftime Show should have included some of the local iconic bands that the World would have loved to see perform. Bands like Metallica, Steve Miller, Journey and yours truly. We would have rocked the Half Time Show and done the SF Bay Area proud. This is just an invitation for you to consider iconic bands as part of your Half Time entertainment. Real live music, real live vocals, and give the audience real live chills.
– Carlos Santana

I rest my case.