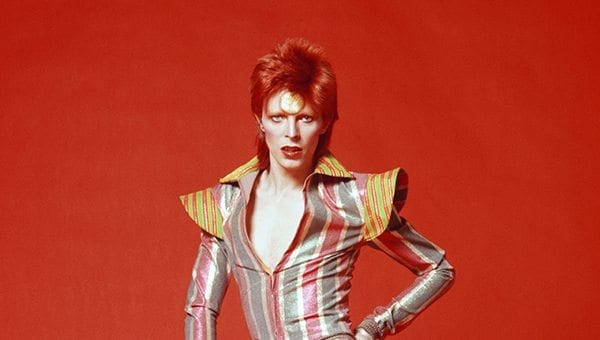 Wow, I don’t believe any of us saw this coming.

I remember when in the very early 70’s an RCA rep friend of mine ran into my office and said, “Oh my God, we’ve got the next big thing!” I thought yeah, that’s what we all say—ha, ha! But it was true, Ziggy Stardust happened and Sharon and I put sticky stars on our cheeks and went to the Long Beach Arena and had our minds blown!

Years later I had the pleasure of working with David on a television show that I had helped create called A&E’s Live By Request. I am happy to say that you can view the entire show on YouTube (or just scroll down to the bottom of this page). It’s really worth watching as you will get an intimate glimpse of the real man behind Ziggy and all the other personalities he created over the years.

The show was designed to be intimate by nature—artists performing in front of a small audience right on the floor in front of them, no stage. The artist took phone calls (and a few e-mail requests) from fans all over the country and had genuine conversations with them about his or her music (or favorite restaurant, whatever) and then played the fan’s favorite song for them live over the air. The show was truly a big warm smile and ran for eight years boasting 40 artist performances. We even won an Emmy.

The Bowie show is one of my all-time favorites because he was so genuine about his answers—you really got to know him in a fabulous way. And also because he had such a great band and the music was just so stellar. David was an absolute pleasure to work with and no one could believe we were watching all these great songs being performed right in front of us. At rehearsal the night before, we were camera blocking the show and getting the sound right. I was in a front row seat taking notes and helping with the finishing touches as Bowie played through at least a dozen numbers. So many of David Bowie’s songs are so deep in our DNA we sometimes forget the emotional power they have. It is absolutely true when I tell you that as I looked around the room I saw grown men–camera men, sound men, etc., actually crying. It was that beautiful.

Just a couple fun stories. One of David’s guitar players was my old friend Earl Slick. I took one of my young sons to rehearsal and had fun introducing a real rock guitar legend to him. I noticed Slick was using the new reissued Ampeg Revererocket amp. He had two of them side by side. I asked him to crank them up and hit a power chord for us, which he kindly did, and of course our hair blew back–we smiled. But I asked Slick why was he using two amps? It was a small setting and for TV in general one never uses too much power in the amp department. He looked up, and in all seriousness gave me one of the great rock and roll guitarist answers of all time—it was a truly Spinal Tap moment but I say that in the most sincere loving way. He said, “Well if I only had one, I’d be unbalanced right?!” I immediately went home and told Sharon I may have to purchase one of the new Ampeg Revererocket amps cuz they sound so good, and furthermore I will need to buy two, because I don’t want to be unbalanced. She threw me out of the kitchen.

During the Live By Request shows one of the many things I was in charge of was the phone room. This is where over a million and half callers on average were calling trying to get to talk to their favorite artist. We had three or four young ladies in that room who took the calls and screened them just to make sure we didn’t have any crank callers. This was totally live TV after all and we had no tape delay.

At the very end of the show a father called with his 5 year old son. When things were questionable it came down to me which callers would make the air and which wouldn’t. Do I risk putting on a 5 year old?? The kid is liable to say anything. Hell, he may not even have a grip on who David Bowie even is! I guess I was feeling strong and confident, so I said to put him on. When you hear that little voice say, “Hi David Bowie!” Well, it’s just priceless, a fabulous live television moment, and indeed, George knew his Bowie music! If you only have time to watch part of the show you can fast forward to about 1:18 on the YouTube video and you can see and hear for yourself.

As I write this, I am still processing the loss of such a great artist.

I also lost a great friend last week, Debbie Gold. I thought I’d give her a shout out as you may know some of the stuff she did, but of course, would not know her. Briefly she worked very closely with Bob Dylan for some years, produced those two acoustic albums, and created the board game Grateful Dead-Opoly (which I urge you to get and play even if you’re not a Dead Head—it is such a blast to play—rock Monopoly! Her one-of-kind personality and love for all will be very missed by many of us in the industry.

Anyway, for all of us left on the planet…

“LET ALL THE CHILDREN BOOO-GIE”

In this article: David Bowie
Published in: Backstage Access, Spotlight