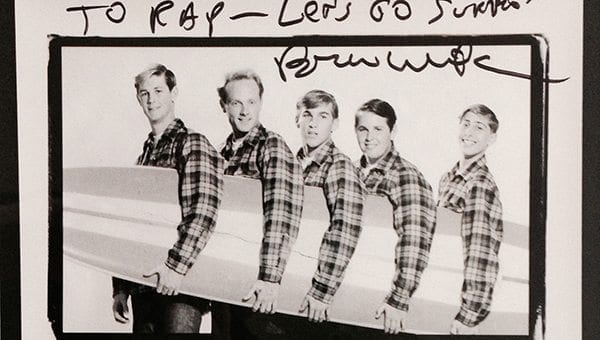 Brian Wilson is on his Pet Sounds 50th Anniversary Tour and my friends are raving about it. I am not surprised as every time I’ve seen Brian it’s one huge fun-sing-along and you leave his concerts with a euphoric smile that seems to last a week. He touches us in a way like no other.

I was skeptical about seeing the recent movie “Love & Mercy—The Life, Love, and Genius of Brian Wilson”, because I thought it might be just another insensitive Hollywood money-grab, but Judy told me it was terrific and a must-see. Boy was she right—it’s a very moving story that amongst other things shows Brian’s transcendent connection to the Universe’s wellspring of creativity. In short, incredible music just shows up in his brain, not unlike Bob Dylan or Mozart. And John Cusack gives an Academy Award performance as Brian.

After seeing the film and hearing about Brian’s current tour I was moved to write a bit about my own personal experience with him and especially his music.

I grew up in Southern California and the Beach Boys sang about the life I was living—hot cars, girls, and surfing.  The songs were fun, and the production was awesome, and great fun to sing along with.  In that spirit I went out and bought the single “Be True To Your School.”  But it was when I turned the record over to hear the B-side that my life was changed forever—I heard “In My Room.”  As a fifteen-year-old boy with a lot on his mind about how to fit in and the fear of perhaps never fitting in, Brian Wilson spoke to me.  Young men don’t talk about their feelings, we’re not even sure we’re supposed to have them.  Having secrets, worries, and fears—crying and sighing all seems like girl stuff, or some sort of weakness if you’re a guy, and we feel awkward dealing with those emotions.

When I heard “In My Room” I was shocked.  First, that another young man also had all of those feelings, and second that he was brave enough to sing about them, to tell other young men that he felt this way.  All of a sudden I felt that I was not alone, and that maybe other men my age just might be feeling the same way.  I couldn’t get over the fact that someone made a record like this and I was so thrilled that they had—the world began to slowly open and reveal itself to me in a much bigger way after this experience.  Brian Wilson told the truth about his inner most feelings and I’d never heard anything nearly that deep before, not a confession like that.  Subsequently, every time I heard a Beach Boys record I recognized a kind of universal truth in each one.  A human truth that everyone could relate to—something much deeper even if it came in the form of pop music.  And if “In My Room” opened the door, certainly “Don’t Worry Baby” sealed the deal.

Years later I found myself in the music business and years after that wound up co-creating the music television series “A&E’s Live By Request.”  I became friends with the show’s script writer David Leaf who was friends with and had worked a lot with Brian.  Along the way he was hired to write another show for the same production company about great American songwriters.  They were shooting one for Brian Wilson and David asked if I wanted to come to rehearsal and meet him.  I said yes faster than he could finish his invitation—not only did I want to meet Brian, I felt I HAD to meet him—so much of him was in my DNA.

I walked in and Brian was at the piano rehearsing some singers for “Surfin’ USA.”  I waited for the right moment and introduced myself.  He was still in the music plunking the piano keys looking to get it perfect for himself and he looked up and said, “Isn’t this a great song!!!”   He was so excited and he said it as if someone else had written the song, or that it didn’t matter that he’d happened to write it—it was just pure joyous emotion to be singing a great song.  It was then that I realized his true gift—he somehow could tap into human truth in some subconscious magical way that captures the glow within us all, his music embodies the glue that holds us all together.

That’s why when we see Brian perform (or when we saw the Beach Boys 50th Anniversary tour) we are so joyous we are almost moved to tears—it’s because we see and feel that universal truth, that human connection.  It’s like love—how can you describe it?  It just is.

I usually have to watch myself from over hyperbole, but in the case of Brian Wilson, I truly believe his music emanates from the Divine.