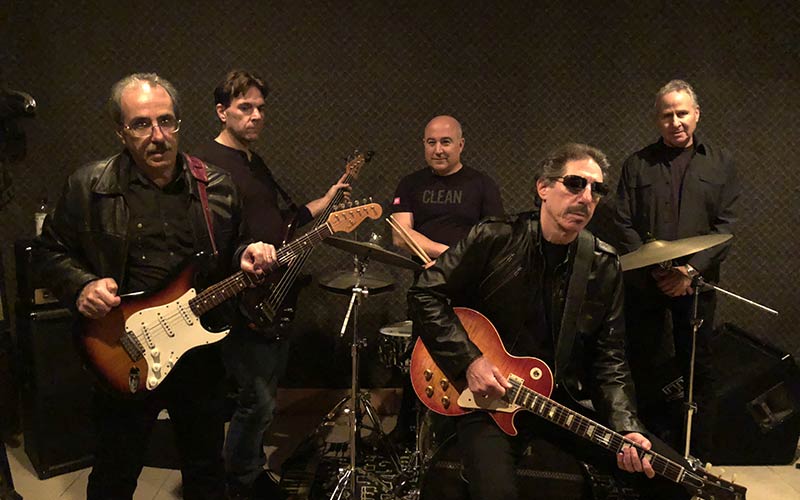 I put together a blues jam session a couple years ago just to try and up my game as a guitar player. That session organically turned into a pretty hot blues band, which is now called Blues Next. I wrote a rockin’ blues song about how the world didn’t turn out the way I wanted it to, or how I thought it would be. It’s called “The World Has Changed (a modern blues).” We had a blast recording the song and also making a music video for it. In “The World Has Changed” the lyrics are meant to be serious (even though some are tongue and cheek), but we wanted the video to be light, entertaining, and fun to watch. Old friend Bob Geldof came to town and did cameo appearance (at the beginning and end of the video), which is pretty funny. The rest of the cast is the band, surf crew, and many family members. I hope you like it.

Blues Next – “The World Has Changed (a modern blues)”

If you like the song I invite you to go to www.bluesnext.com where in the spirit of the new record “business” you can download it for FREE. 😉

The song and video speak for themselves and obviously poke fun at our overuse of technology — even the scene where our other guitar player, Rob Matarazzo’s solo is turned into a video game a la “Guitar Hero.” But seriously, as much as I like my iPhone and do embrace a lot of the new technologies, I truly believe that we are all physically and mentally addicted to our smart phones. Try not checking your phone for an hour or two—you will find yourself itching to do so, worried that you’ve missed an important message or e-mail. We also love the instant gratification we receive when we get quick answers from an email or text message that we’ve sent. It’s been proven that those responses elicit dopamine in the brain, which is the chemical that creates the feeling of love or infatuation within us. And as long as I’m on my soapbox I have to say, as great as computers and the Internet are, I feel we have all become grossly overworked because we are able to send and receive information 24/7.

In my opinion, all of this is unhealthy. Not that long ago, weekends used to mean time off, and as human beings we need a chance to rest and recharge our batteries. Too many mistakes are made both professionally and personally when we are tired and fatigued. So in some ways I do believe that all this new tech and overload of apps has us on the run and feeling the pressure of being a bit “under the gun.” One last point is, even though we’ve become used to all this technology, the fact is it hasn’t been around for all that long and I feel we don’t even know what it all means yet.

Having said that, if we can get it under control, we really are celebrating a new age, not unlike the Industrial Revolution. Especially for musicians and folks that are interested in film it’s truly fantastic. Because so much is on software now, my band was able to record with the finest equipment and cut a track for only $450.00. Back in the day, that same track cut at the Hit Factory would have cost $4,000.00! The Hit Factory was also notorious for charging you for the cups and spoons you used from their catering department, but hey, when the record company is paying who cares?!! Anyway, you get the idea.

The same was true for the video—a basic decent video used to cost $150,000.00. A true epic video like Steve Perry’s “Oh Sherrie” could cost $300,000.00 or more. Now you can get a great digital camera to shoot and then sit at a computer and do all the fancy editing you want on your own. As for me, I wanted to make this video down and dirty, and hopefully the homemade look brings some charm to it. I shot the whole thing on my iPhone 8. My co-producer bass player band mate, Gregg Gavitt is a multitalented musician, record producer, and budding video producer. We had so much fun looking for, and using different effects to use, and we had no idea what they were or what they did until we pushed the buttons. When we wanted to use a Wipe (a type of film transition where one shot replaces another by travelling from one side of the frame to another or with a special shape) the program we were using would offer us like twenty choices. They all had wild names, like “Duochrome,” “Liquify,” and “3D Grid Explosion.” “YEAH! Push 3D Grid Explosion!!” I’d yell. We laughed our asses off watching what all these things did to our images. Gregg insisted that if I were directing a movie that I get hold of the legendary cap worn by Rob Reiner who played video director Marty DiBergie in This Is Spinal Tap. Citing the better part of our new technology, sure as sh*t I went online and guess what? You can buy one! So here are Gregg and I in the studio, me wearing my “USS OORAL SEA” captains hat—what a riot!

Just a note on songwriting — I don’t fancy myself as a songwriter per se, but I did write poems as a young man, which just kind of showed up in my head. It’s the same for songs. Most songwriters will tell you that they feel like conduits—they receive some sort of transmission from the cosmos, craft it, and then transmit it to a recording. The late, great lyricist and composer Johnnie Mercer once said, “All the songs have already been written — they are up there in the stars somewhere. All we do as songwriters is just reach up, grab one, and bring it down.” In the course of my life I have written a few songs, which I believe are genuine because they just kind of showed up for me in that fashion–usually inspired by a relationship or some drama that occurred in my life. “The World Has Changed” came naturally as I began to think, ‘if I’m in a blues band, what am I blue about in the 21st Century?’ The lyrics just popped into my head, and the music was inspired by a bass line in an old Muddy Waters song. One night while I was in bed, plucking a few licks before I went to sleep the basic riff just sort of fell out of the guitar. I went back to the internet the next day to make sure I hadn’t stolen anything, and was pleasantly surprised to find that somehow I had, indeed, written an original riff.

Lastly, for all the new gear, technology, and gadgets that are available in the recording studio, the basic sound you hear on “The World Has Changed” is my Gibson ’59 Les Paul reissue plugged into my original 1955 Fender Champ amp that I’ve had since I was seven years old. If you plug that guitar into that amp and turn it up to about 6 or 7, that’s the sound you get! The crunch you hear from early Who records comes from a similar set up. And Jeff Beck was famous for using the Champ (which is very small) when playing live to get his sound, and then miking that sound through a bigger amplifier to play in larger arena size venues. On this recording old school meets new school to create a pretty cool sound.

Anyway, as I said, I hope you like it, and if you do please take the time to share the song and video with a friend. If you’re not a pop star these days, it’s much harder to spread the word and all help is much appreciated.

And if you like the band, again please go to www.bluesnext.com and click on the Video tab — you will see some fun live performances there.

I want to thank the “secret weapon” Gregg Gavitt on bass, Rob “Fenderman” Matarazzo on the Stratocaster guitar, the “hard hittin,’ heavy liftin,’never quittin,’” Victor Ruvolo on drums, and Pete “Paul Butterfield” Kaplow on harp — all outstanding musicians, for their hard work and dedication making Blues Next something pretty special.

May the New Year bring you lots of love and all good things!

In this article: Blues Next
Published in: Backstage Access