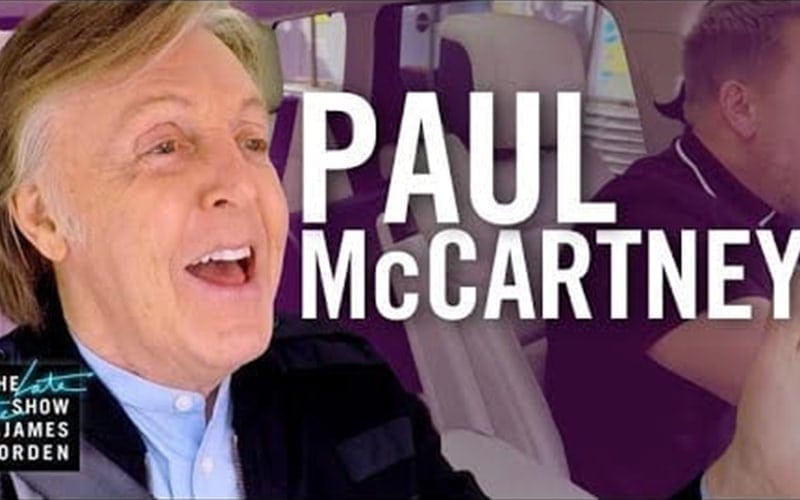 Take the time to give some real attention to this and watch it all the way through to the very end — I guarantee it will blow your mind and tug at your heartstrings in the most wondrous of ways. (If you haven’t seen it, scroll down to the end of this post to watch).

I started crying at “Penny Lane.”   I am a music industry veteran for now almost 50 years. For thirty three of those I was at Columbia Records and had the unbelievable great adventure of working closely with so many of my rock and roll heroes — Bob Dylan, The Rolling Stones, Pink Floyd, and Bruce Springsteen, just to name a few, and also the wonderful Paul McCartney.  You would think that I am used to it by now, knowing all the things I know about the inside of the business and the not so perfect lives of my heroes.  But watching this, I just lost it.  So much of my life (all of our lives) just kept flashing by.

I have always been a Stones guy. At seventeen I fell in love with their blues, the rebellious lifestyle, the danger, the drugs, the whole thing.  In high school I used to dress like Keith Richards and learned how to play the electric guitar listening to those early Stones albums. BUT, the Beatles are the Beatles and those songs and how they changed our culture and our lives for so long runs so deep that I was balling like a baby watching this clip.  And it caught me by surprise in much the same way it caught Corden.  Even after the hits of our teenage years, I remember countless nights of getting high and listening to Abbey Road—I even bought the English pressing so I could hear the birds and all those little extra sounds that were not audible on the American copies.

Paul says it himself, “The power of music, isn’t it weird how that can do that to ya?”  Yes, amazing how that works.  The Beatles’ images and messages are so incredibly powerful, moving, and beautiful that they can just, well,…make you cry.

I think of all the artists I ever had the pleasure of working with, Paul McCartney was the classiest and most gracious of them all.

One project I remember most dearly was the Give My Regards To Broad Street album and movie.  Not that it was the best album that he made for Columbia but it was the first where I got a real close up glimpse of the man himself.

His popularity so enormous, the pre-press and promotion interviews worked like this.  20th Century Fox rented out an entire floor of the Plaza Hotel and put every different country’s media (press, radio, and television) in their own personal suite.   Paul went from room to room and each country had a certain amount of allotted time to do interviews with him.

We had a suite for American rock radio and figured out the best use of our time would be if we could avoid each station having to bring their own recording devices and taking the time to set them up, get levels, etc.. So we had one big tape recorder (remember those?), a couple engineers, and two mics facing each other on a small table.  All each radio stations’ interviewers had to do was come in, meet Paul, sit down for their 10 to 15 minute interview, and as they left we handed them their tape—very cool, if I do say so myself.

Of course, there was always some extra time allotted just for the introductions as meeting Paul can be overwhelming and most folks have some things they just have to say to the man.  In a most touching scene, Helen Leicht, who I believe was working at WMMR (or maybe WIOQ) in Philadelphia at the time sat down in front of Paul and gave him a piece of art she had made for him (might have been a needle point).  The mics were opened, Helen looked up across the table at Paul, and she couldn’t speak—she wobbled a bit and then just burst into tears.  All of the music and everything that Paul and The Beatles had meant to her in her lifetime came rushing to the fore and she was completely overwhelmed and helpless.  Paul got up from his seat, came over to Helen, lifted her up and starting hugging her.  He let her cry in his arms—he knew what this was about.  He had obviously experienced it many times before and he understood and accepted the fact that he had a much larger job and role to play than even being the artist Paul McCartney—he was a world ambassador for some of the greatest music and messages ever created.  He knew what he meant to people, how they felt, how they reacted, and he wanted to help them through this experience.  Not out of ego, but out of love, understanding, and genuine connection.

Paul took the time to connect to Helen, to hug her, to thank her, to give back, to calm her. The cutest thing was, she sat down, finally composed, took a drink of water, cleared her throat, looked up with a smile in her eyes, and,… started crying all over again!  But she got it together and did a very heart warming interview.

We were the last media of the day and when we finished it was 7 PM.  Paul looked over at me and asked, “Are we going to visit the troops at the office?”  A visit to the legendary 12th floor of Columbia Records in the Black Rock building was on my schedule but it was getting late.  I explained to him that yes, many people were there waiting to meet him including all the secretaries and assistants, but he had been working non stop since 9 AM and I could see he was dog tired. I felt the need to ask if he might be just too worn out to continue this already very long and arduous day.  He said, “It’s important, we should really go, I want to go.”  I was so blown away by his willingness to give the extra time, to really push himself to the brink and for the every-day folks at his record company, no big time execs that he had to shake hands with—these were just flat out fans.

We went (6 blocks in a limousine — it was kind of funny because it took way longer in NY traffic than it would have been to just walk, but you can’t walk Paul McCartney down 6 blocks in New York City—you can’t even walk him a half block without an overwhelming mob scene).  That beautiful man stopped at every single desk on the entire 12th floor, hugged and kissed all the gals, took pictures signed autographs, and did not leave until after 9 PM.

I saw him play the bigger role, the one that he was so grateful for, the one he knew he owed to his fans and the people of the world.  And I saw him do this beyond the sense of duty — it was so heartfelt and genuine.

One of the great days I’ll never forget, and that same kindness and universal celebration of The Beatles and their music is so evident in this clip.

In this article: Beatles, Paul McCartney
Published in: Backstage Access