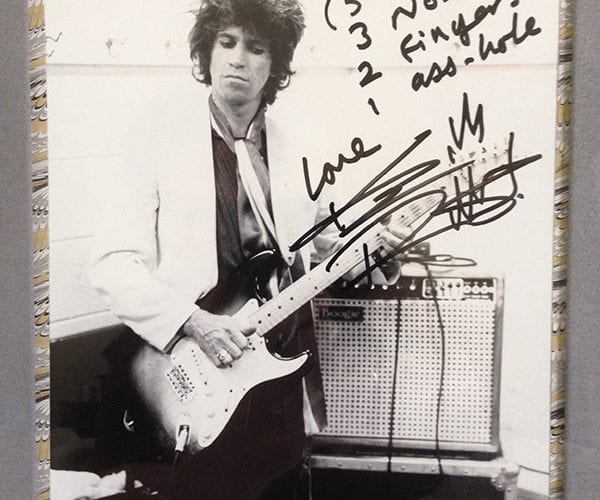 The Rolling Stones have been my all time favorite band since I was 17 years old.   I learned how to play electric guitar listening to Keith Richards on all the early records.

In high school I was going steady with a very cute sixteen-year-old Southern California Valley girl with long beautiful straight brown hair named Sharon.  At the time I was in a cool band that played local dances and a lot of our cover songs were Stones songs.  Sharon and my favorite was, “Every Body Needs Somebody To Love”–it was our song.  And, we were hip—we preferred the English album version over the American release.

In 1966 we went to see The Stones at the Hollywood Bowl. We stood up, danced around, and generally went crazy like you see on the old black and white newsreels.  Fast forward 20 years later–Sharon and I are married, have moved to New York, have two young sons, and I have become the head of album rock promotion for Columbia Records.  I am sitting on a couch next to Mick Jagger on the legendary 12th floor at Columbia’s headquarters at West 52nd Street telling him his promotion and marketing plans.  The two most amazing things are–number one, I actually know what I’m talking about!  And number two, he’s actually listening to me!!  If you would have told me when Sharon and I were at the Hollywood Bowl that one day,….well, you get the idea.

So, I was in heaven—The Stones had left Atlantic Records and were now on Columbia.  I have stories for days, the kind that I will remember forever, but I want to share just one now, because it illustrates what they are all about and why they deserve our undying admiration.

The Rolling Stones are a real band in the true sense of the word.  The kind that listens to each other, play off each other, and makes music like a single unit that lives and breathes as one organism, and can change its personality whenever it likes to suit the mood—no click tracks here babe.  Even at these ages, they ARE still the worlds’ greatest rock and roll band. Think about that statement for a second.  You can think for as long as you like, but you cannot name a better rock and roll band on the planet today.

Mick Jagger’s work ethic is second to none, and I’ve only seen a few artists driven like that — Bruce Springsteen and Tony Bennett come to mind.  It’s why The Stones are the last band from that era not only still standing, but still pouring it on!

I had met Keith and Woody during the “New Barbarians” tour in 1979.  I’m lucky to have survived that—it was like better living through chemistry.  Ha, ha—stayed awake for days on end, sleeping very odd hours, etc., etc..  Everyone was out of it on that tour so I didn’t get to have a real conversation with my all time rock hero, Keef. (There’s a funny story from touring with the New Barbarians in my tribute to Ian McLagan here).

But when The Stones came to Columbia, it was different—not over the top partying, and I could have those kinds of conversations, especially the music ones.  Mick was blown away that I knew about the two versions of “Everybody Needs Somebody To Love,” and that the European album version was superior.  I told him I had ordered it before imports were even a thing—cost me $8.00 at the time (a lot of money for a blue collar kid to spend on just a record) and it came by boat, and took 3 months to show up, all the way from England to Downey, California.

For the “Steel Wheels” tour, as is tradition, the band opened at a small club—Toad’s Place in New Haven.  That’s when I really saw just how great this band truly is.  No big light show, no grand staging to hide behind—no larger than life sound system where you can make a mistake but no one will hear it because the show is in an arena setting.  This was small amps, small PA, with a real club sound—you could see and hear everything.  The stage was so small the band could barely fit, and there was no room for Mick to even show off all of his dance moves.  It was his vocals and how he presented each word that just drew you in, like only Frank Sinatra could.

That band, in that room, set the record straight—pinned people’s ears back, the incredible precision of the “weaving of guitars” all around Charlie Watts’ back beat–yet played loosely like the Stones are meant to be.  The truth was shown, they don’t need all the bells and whistles if they don’t want—they are just a flat out a GREAT FU*KING BAND!  And when in full flight, can take you anywhere.

And, while they love being The Rolling Stones and all the stuff that goes with it, they are players first and foremost.

While The Stones were on Columbia, I got to have that talk I always wanted to have with the rock hero who inspired me to play the electric guitar.  I tried not to gush too hard and just told Keith the facts.  He was so happy to hear that whatever he was doing as a guitar player he had “passed it on” to other musicians.  He talked to me like a fellow player, not like a rock God to a record guy.  He said that rock and blues guitar had been passed down to him from people like Buddy Guy and Chuck Berry and that his job as a musician (in fact, all our jobs as fellow musicians) was to pass it on as well—this wonderful way of expressing oneself on the intimate instrument the guitar.

So then, he went on to give me a bit of a guitar lesson!  He insisted I try G tuning which is one of his secrets.  He told me the reason why the exact sound of The Stones eluded my high school cover band was, that we were trying to play Stones’ hits without being in G tuning.  He got very excited about passing this on to me.  He said, “Go home, take the bottom (E) string off the guitar, it just gets in the way–then tune the A string to G and so on.  Use a simple bar chord position with only two fingers and see what happens–then report back!”

So, I go home thinking, “Take a string off the guitar because it gets in the way??”  But I do as the master suggests and low and behold—EVERY GREAT ROLLING STONES SINGATURE RIFF AND SONGS ARE IN G TUNING!!!  You name it, “Start Me Up,” “Brown Sugar,” “Honky Tonk Women,” and on and on and on.  And once you begin to play rhythm guitar like this, you even see how that signature Keith Richards arm movement evolved.

So, I report back and we have another great musician conversation.  When the Stones left Columbia (for more money)—quote Keith, “Don’t take it personal, it’s just business,”– I asked if he’d sign something for me as a memory.  He said of course, and I sent him a photo I had of him back stage years ago warming up for the Barbarians.  It’s a great photo because it shows him as just a player with his eyes closed trying to grab a great chord—in G tuning!

It’s also a great photo because it was taken by one of the world’s greatest photographers, Henry Diltz.  Just go to www.MorrisonHotelGallery.com and you will see so many familiar photos of your rock icons that your head will spin.  His photos are on some of the most famous album covers of all time and you will see countless other images that now reside in your DNA.  One of the things that Henry is most noted for is his ability to capture candid shots when the artist isn’t looking.  He has such an easy way about him that he can be backstage just hanging out, and all of the sudden all these great photos show up–and no one remembers that he even had a camera!

The signed photo is my prized possession, above every gold or platinum record, or any plaque I’ve ever received.  It hangs on the wall right across from my desk.   The caption is Keith’s description of the photo of him in G tuning.  It reads “To Paul, 5 strings, 3 notes, 2 fingers, 1 ass-hole, Love, Keith Richards.”

In this one photo, it says everything about Keith and The Rolling Stones.  He and that band are real players above and beyond anything else.  That’s why they are still the world’s greatest rock and roll band.

And, while they are very proud of their achievements they also know deep inside—“It’s only rock and roll”.

If you are in one of the lucky zip codes that The Rolling Stones are coming to on tour, don’t miss this show—their kind are not likely to pass this way again for a very long time.

Here’s a clip of the Stones performing “Jumpin’ Jack Flash” on opening night of the Zip Code tour: