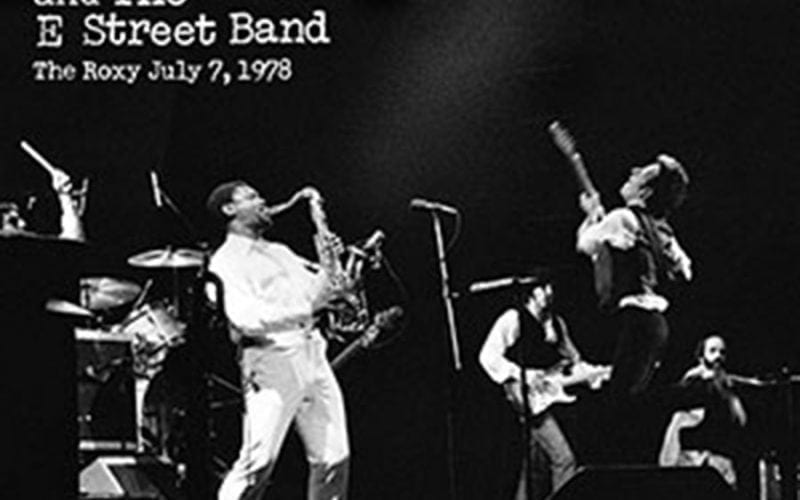 Bruce Springsteen and the E Street Band, The Roxy July 7, 1978

I still want to tell you that funny Ian Hunter road story (cuz you can’t make this shit up), but first I think I’ll write about Bruce at the Roxy 7/7/78.

The reason this is coming up now is that last weekend my wife and I spent time with another couple who are old friends of ours that we use to hang with in the early days of the LA record biz.

The gal used to work in publicity for Columbia Records (as did Sharon). If you saw the movie Almost Famous, they would have been the ones giving Cameron Crowe free records and driving him around because he was too young to drive!

At any rate, she told us for the first time how Springsteen wound up on the cover of both Time and Newsweek on the exact, same week. We all thought that it was just serendipity. In fact, everyone thinks that—and no one has ever known, until NOW. I don’t think even Bruce or Jon Landau know how it happened! And…I’m not gonna tell it here (sorry), because it’s not my story to tell. But if she gives me permission, perhaps one day I’ll write about it. It’s actually a really great story!

But I can write about Bruce Springsteen at the Roxy because that’s my story. I was in charge of that one, and what a roller coaster ride that was!

This is a long story, but worth telling and worth reading, because of all the insane stuff that went down behind the scenes. I will have to tell it in parts though, because it’s just too much for one writing session. So here’s a beginning.

In the summer of 1978 Bruce was really starting to break big. But even though he had a loyal “cult following” of about a million people (pretty funny huh?), he hadn’t broken through to the masses.

He played the Forum and it was a really great show (as you know, Bruce is always great, or GREATER), but it’s hard to really buzz LA because it’s such a big, sprawling place with so much going on.

So Jon felt we needed something more. We came up with the idea to do another show, one at a small venue that we could broadcast live over the radio—a real EVENT, if you will.

At the time, KMET FM in Los Angeles had the biggest ratings of any station in town. The focus on rock music was huge, and the station boasted having so many of the legendary FM jocks of the day. You got rock, and you got the ultimate rock DJ personalities of the time. Indeed, the station had a 7 share, which is HUGE and unheard of in the radio biz. To give you an idea of just how powerful that is, the average radio station makes a nice living if they pull a 3 or 4 share of the audience. So, the MIGHTY MET ruled and at the exact same time Bruce Springsteen was the greatest thing in rock and roll.

The marriage of his live performance broadcast over those powerful airwaves was the perfect storm—and it blew LA to pieces!

Imagine this scene. The Roxy packed to the gills, maybe 300 hundred kids outside with their ears pressed to the walls cuz they couldn’t get in, and every single car coming down the Sunset Strip blaring Bruce over their radios all turned up to 10! It was a freakin’ party and one of the biggest “shared” experiences Los Angeles has ever known.

After Jon got Bruce’s OK to do the show (the Boss is famous for his deep thoughts that take a second to get an answer – ha! That’s OK, if he reads this he’ll laugh), I went to KMET to have an emergency meeting as we had like only 3 or 4 days to pull this together. I was with Sam (a great gal who was the Program Director) and the General Manager, named David. In those days live broadcasts meant you had to hook up phone lines through the telephone company and they were not always paying attention to detail like we would wish. One also uses a remote recording truck, which is parked in the lot adjacent left to the building. The telephone lines were hooked up inside and dropped out the side window and into the truck.

I had a lot of experience with live broadcasts as they were very popular back in the hay day of FM and I loved doing them. Especially with Bruce because his live show was (is) always so exciting and over the top.

So, there I am telling them that we have only 3 days to do this (I remember now, cuz it took Bruce a whole day to decide—ha, again–warm remembering smile here). I told them that we really needed to be extra diligent, get the sound truck there early, call the phone company early, have all the people working on the show get to the Roxy early, just in case.

The tickets went on sale the next day. The line was huge and no one from the venue thought to go out and tell the folks who were lined up after the first 400 that, that’s where the last tickets would be sold. With over 1,000 people in line it appeared that the box office had opened and closed in a period of just a few minutes. A near riot ensued and kids started showing up in the lobby of KMET and at the Columbia Records offices, all demanding tickets! The word spread that the record company had taken a bunch of tickets for themselves and celebrities, etc. This was not the truth, but Jon Landau and I wound up on the KMET news having to explain why it seemed that hardly any tickets were sold.
(After that show, promoters in general started giving numbers to kids waiting in line so that there would never be any more misunderstandings like that again).

It was pandemonium in a Beatle-esque kind of way. Exciting but maddening and ultra nerve racking.

I had commemorative T-shirts made for the event and put one on every seat in the house. They were made by my friend Tom Christopher who has gone on to be a well known and successful painter selling all over the world (I wish I’d saved a shirt!).

So, after all that madness it’s day of show. I get to the Roxy early. But I’m the only one. No station personnel, no truck, no telephone company workers. GULP! I love Bruce Springsteen, I even love Jon Landau—I can’t let them down, much less my own record company!! Career over?

What ensued will be one of the wildest stories you will ever hear, I promise. I also promise not to take so long in between writings.

In this article: Bruce Springsteen
Published in: Backstage Access, Features