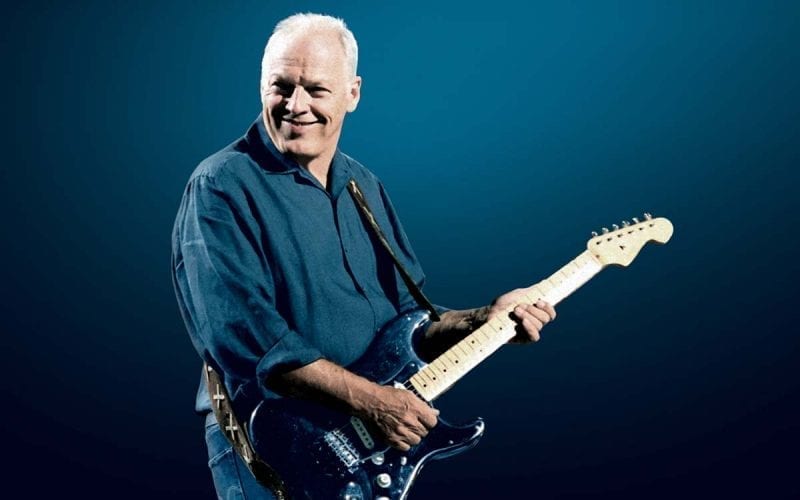 David Gilmour with "The Black Strat"

The first time many of us heard about David Gilmour’s overly generous philanthropy was in 2002 when he sold his beautiful London home for approximately four million pounds and handed the cash straight to Crisis, a British charity supporting the homeless.

That blew a lot of people’s minds.

Turns out that David had been giving large sums of money to charitable organizations for years, but that fact was not widely known, as he is a very private person.

I have been lucky in my career to have closely worked with many great artists — Bob Dylan, The Rolling Stones, Bruce Springsteen, Pink Floyd, Willie Nelson, Tony Bennett, Billy Joel, Santana, Journey, Elvis Costello, James Taylor, and on and on.  I don’t tell you this to drop names but to give some real gravitas to this statement:

Of all the artists I’ve ever worked with over the years, David Gilmour has the biggest heart I ever met.

And for all the celebrity he has achieved over the years, he is amazingly down to earth.  All you guitar players out there will be happy to know that beneath all the Pink Floyd mystique David Gilmour is foremost just a guy who understands and loves to play the guitar.  And he talks about guitars the same way any of us mortals do.  In fact, speaking of being mortal, David has often described himself as being just that.  He once told me that when he is thinking about creating a great guitar solo, “…I think, what would Jeff Beck do? I’m just a normal person.”

He acknowledges that guitars have souls and that each one will give you a different gift.  “You pick up a guitar that you haven’t played before and somehow it sets off some little inspiration in you, and it kind of gifts you a tune.”  However, he also views them as simply tools of his trade, like a carpenter who chooses carefully a particular kind of file or Dremel to shape a piece of wood.  He’s not that wound up about this or that guitar which may have played an iconic solo or phrase on any of Pink Floyd’s legendary albums.

During one of my many interviews with David on his recording studio houseboat the Astoria, his manager asked if as an extra I could get him to talk about his famous black Fender Stratocaster, affectionately known as “The Black Strat.”  Phil Taylor, Gilmour’s well-known guitar tech was so enamored with the amount of iconic music made with the instrument that he wrote a book about it.  Fender was in the process of copying the original guitar to make a replica for their ‘Signature’ series and Phil, Fender, and David’s manager, thought it would be great to have David do a little video about the instrument, it’s history, and talk about what the guitar meant to him.

But David didn’t want any part of it—he couldn’t understand what all the fuss was about.  “It’s just a basic Strat that I got from Manny’s (a famous music store in mid-town New York) a long time ago.  Since then, I’ve added different pickups here and there, a special switch to change their configuration, drilled holes in it, changed the neck a couple times, made the tremolo bar a bit shorter to fit my hand better, and it’s become a real workhorse for me over the years.  But there is nothing special about the guitar.”  He looked up at me, “It’s these fingers (holding up his left hand and wiggling them) that play all those notes and solos—it’s me, not the guitar.”

I sat him down and I said, “Look, no one is casting any aspersions on your talent.  That’s not what this is about.  It’s just that the black strat has been on so many albums that it seems to have grown a kind of personality on its own. Most guitar players, including myself, may have a few guitars or more that they like to play, but there is always one who becomes a special friend.  I have one, do you?”  “Yes,” he said, “The black strat.”  “Well Dave,” I smiled, “that’s all anyone is trying to say.”

Once having grasped that proper perspective, he took a deep breath and seemed to immediately be quite relieved–actually got physically relaxed.  “Oh,” he said.  Then he smiled and really began to open up and talk a lot about the Fender replica.  “Here, play one of these.”  Fender had sent him a few working models with their latest tweaks and upgrades to insure they made an exact copy of his original.  “I think they’re so good sometimes when I play one I can’t tell if it’s my original or their copy!”  There had been about seven re-dos on the replica so far (which is a lot) as Phil and Dave had kept sending them back to Fender with new notes each time they got the next batch, trying to get the thing to be one hundred percent accurate.

I picked one out, played it a bit and found it pretty amazing.  The neck had a very comfortable “C” shaped profile on the back side rather than some other models which boast a chunkier “baseball bat” style.  The guitar was so easy to play it almost played itself.  After Dave left the interview the studio guys let me play his original black strat to compare.  That was really special to say the least, this was the legendary guitar featured extensively on The Dark Side Of The Moon, Wish You Were Here, Animals, and The Wall.   I found myself playing “Run Like Hell” which is the song I played on stage with the band in 1989 at the London Arena (a Christmas present to me for all the work I had done with them over many years).

I figured since I was a stranger playing this iconic instrument that at least the guitar would be more comfortable and familiar with a song so often played on it, and it would be a nice way to get to know one another.  Ha, ha, talk about communicating with the soul of a guitar.  And talk about that Christmas present, one song live on stage with Pink Floyd—it’s one of the greatest gifts I’ve ever received and speaks again to the wonderfully kind man that David Gilmour is.  ‘Hi, I really want to thank you, come play in my band for one song.’  Who does that??!

Auctioning off these iconic instruments has a lot to do with how Gilmour carries himself, his view of himself.  He’s certainly proud of his achievements and is well aware of his own talents, but overall, he’s just not that impressed with himself.  More than once he’s told me that even though Pink Floyd has made some of the greatest rock records ever, he is continually baffled by all the over-fuss made about the band—“This is just pop music, after all.”

When he wanted to learn how to play the saxophone for his solo albums, he took classes with his son just like any normal dad would.  The teacher didn’t even know who he was and David had no interest in letting the fact be known and being put on a pedestal, he just wanted to learn how to play sax. He came and went to class just like everybody else and took his exams with all of the other students, no one ever becoming the wiser.

Gilmour is also someone who is constantly moving forward. He doesn’t dwell in past glories.  And so it is time for him to let go of more of the past.  He’ll be auctioning off his famous black strat along with many other well-known guitars, including the acoustic 12-string, which we hear at the beginning of “Wish You Were Here.”  The sound of that guitar and the chords being played, have been seared into many of our memory banks for years.

Speaking about the guitars David said, “They have paid for themselves many times over, but it’s now time that they moved on.  Guitars were made to be played and it is my wish that wherever they end up, they continue to give their owners the gift of music.  By auctioning these guitars, I hope that I can give some help where it is really needed…through my charitable foundation.”  Gilmour noted that the money “will be going to the larger needs of famine relief, homelessness and displacement of people throughout the world.  We are going to work on the best way and best balance of making what this raises do as much good on this planet as it can.”

David Gilmour is one of the good guys.  And this story reminds us that music and the people who make it have the power to do a lot of good in this world.

Until next time, keep rockin,’