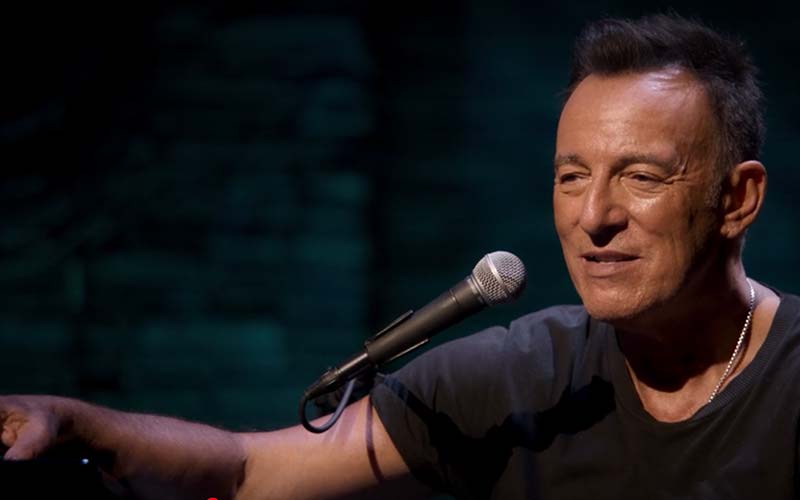 Whether you are a fan or not, you won’t want to miss this — it’s something very rare, in fact, the only one of its kind.  It’s not only a show about Bruce Springsteen’s life, it’s about all of our lives. And if you let yourself relax into it you will have an incredible cathartic experience.

Since SPRINGSTEEN ON BROADWAY began over a year ago, I know many friends and family who went to the show and all of them came back raving about how great it was, even some who weren’t Bruce Springsteen fans at all.  Pete, the harp player in my band, said he was never into Springsteen and yet was so moved by what he experienced, he cried three different times during the show — and then went back to see it a second time.

I think it was a nice move by Bruce to film it and make it available on Netflix for all of us who couldn’t see the show in person.  Knowing Bruce, I am sure this is about spreading the word and not a money grab.

The direction is so brilliant, with all the very moving close-up shots (thank you Thom Zimny), one could argue this experience may even be better than seeing the show in person in some ways.  Music, traditionally, has a hard time making an impact on television.  This is because most music is played coming at you and somehow it has trouble getting past the screen — it just seems to stop there. But in this case the dynamic is working the opposite way; you are being invited through the screen and into to a very private intimate talk.  By the time any music is being played you are in the room with Bruce. It really is something very powerful.

Of course that power starts with the artist himself and Bruce is the ultimate storyteller.  In the beginning, although he never mentions his name, Bruce talks about the cultural effect Elvis Presley had on the world and on himself particularly.  He explains in such an eloquent fashion about the brand new feelings we all discovered when we got turned on to rock and roll — the soul lifting power, the sexuality, the euphoria, that feeling of being totally free.  And “…we all wanted MORE of that!”

Seeing Elvis stirred Bruce to try and learn how to play the guitar at a very young age.  Because the family had little money they rented one for him in the beginning, but Bruce found it impossible to play. The strings hurt, he couldn’t get his fingers to move properly, etc.  But even just posing with the instrument he knew the guitar somehow possessed a magic that he just had to tap into.

He talks about his early bands and dying to get out of Freehold, New Jersey because it was one of those small towns you needed to escape from if you were looking to do something exciting with your life.  Then he makes a joke and says, “I currently live ten minutes from my home town.”  He adds, “…but if I would have come back, who would have bought that sh*t?!!”

He goes on tell us about his life growing up surrounded by the Catholic Church, beautiful stories about his mother, and also how tough life was with his father — how during many evenings his mother sent him into the local bar to tell his dad it was time to come home.  And how Bruce would spend many evenings sitting at the family kitchen table trying to communicate with his dad only to find him in a depressive state, “unreachable.”  For a young man needing a role model, this caused many issues with Bruce, ones that would lead to anger and ultimately his own depression — feelings he would later have to work through in his own life.

I go back with Bruce from the beginning when he was first on Columbia Records. There were only a handful of us who believed in him… who really got it.  So I got to spend some quality time with him and I remember him talking about his father and the many nights sitting at that kitchen table bucking heads. He told me that his father never believed in him, never gave him credit for anything he accomplished — no acknowledgement of any success he was having, no pat on the back — just a hard time.  Imagine becoming the greatest thing in rock and roll, getting immense adulation from fans around the world and the music industry, but the one man you most want to make proud and feel love from gives you nothing — it was very, very tough.

In fact, Bruce told me the first sign of any acknowledgement from his father came the night he won the Academy Award for Best Original Song, “The Streets Of Philadelphia” for the movie Philadelphia.  He came home that night, found his dad sitting at that familiar kitchen table, and slammed the Oscar down hard to get a reaction.  “How’s THIS!!” He barked in an angry tone.  He said, for the first time his dad looked up and said something like, “Hey, that’s pretty good.”

This is not a story you’ll hear in this particular performance, but there are many other moving moments that are quite similar.  One is when Bruce met Vietnam Vet, and activist Ron Kovic.  Kovic invited Bruce down to the VA Hospital where he was rendered speechless trying to take in and process all that he saw there.  Bruce has been haunted by the same fact that many of us share who chose not to go to that war—“I didn’t go to Vietnam,…how many times have I wondered who took my place? Because I know somebody did.”

And there are many lighthearted moments in the show as well. Like the fact that Bruce had never learned how to drive and then needed to get his band across country to do an important show in the Bay area.  He and a friend were paired to drive one of the vehicles and when it was time for the friend to sleep and Bruce to take over the wheel, Bruce finally had to tell the guy, “…Um, I don’t know how to drive.”

‘WHAT???!!!!”  The friend totally freaked out.  Then he came up with this plan.  The friend would start driving, shift the transmission up through fourth gear and then shout, “Switch seats!!”  Because they were traveling on major expressways Bruce could drive for hours without ever having to put on the brakes on or shift a gear!  Of course his friend never really got any sleep because the guy at the wheel really didn’t know how to drive!  They made it though and had a successful show.

During the performance Bruce admits that his “magic trick” is his ability as a poet and storyteller to write songs about situations he may not have personally even experienced—i.e., writing the classic “Racing In The Streets” shortly after this road trip when he did not even possess a driver’s license.  In fact, he never worked in a factory (think about all those factory songs), AND, he never had a real job where you had to work five days a week, “…until, now,” he says, “THIS show, …and I DON’T like it!”

All of us have had our own adventures in life, and therein lies the secret beauty of SPRINGSTEEN ON BROADWAY. When Bruce talks about his Catholic upbringing I’m flashing back to my Jewish upbringing. Different story, yet so much the same. When Bruce talks about his father, or mother, we think about all of our fathers and mothers, and our personal upbringings. So as I’ve said, this is not only a show about Bruce Springsteen’s life. It’s about all of our lives, and that’s what keeps hitting home story after story. In some ways it’s like looking in a mirror.  That fact, and the acoustic music which gives us a chance to really get inside the lyrics, will make you laugh, cry, and get a healthy dose of life itself.  The emotion, which he brings to the performances of his songs, is staggering. It will take your breath away.

Is the show perfect? It is not. It has flaws just like the artist.  One of my all-time favorite quotes about recording artists is from Bruce himself. He once said, “Trust the art, not the artist”.  The art is true, but the artist is flawed just like any other human being.  And that is the overall point of this show. You are seeing a very successful rock star uncovered, exposed, flaws and all.  That serves as the bridge that is built between Bruce and us who are watching.

Here is the trailer but it’s just a small glimpse of the huge impact that really takes place during the show.

Lastly, fan or not, please give the show time to develop. Stay with it until it really gets going. Any good Broadway play takes time to develop and you can’t make judgments too fast.  I know because I make judgments too fast.  My wife always has to calm me down and remind me to go with the performance and see how I feel at the end. I had to remind myself of this as I watched the opening to this show.

I think it’s one of the greatest, most intimate performances ever.  But hey, write back and let me know what you think.

Happy New Year, and all the best to you and yours!

In this article: Bruce Springsteen
Published in: Backstage Access