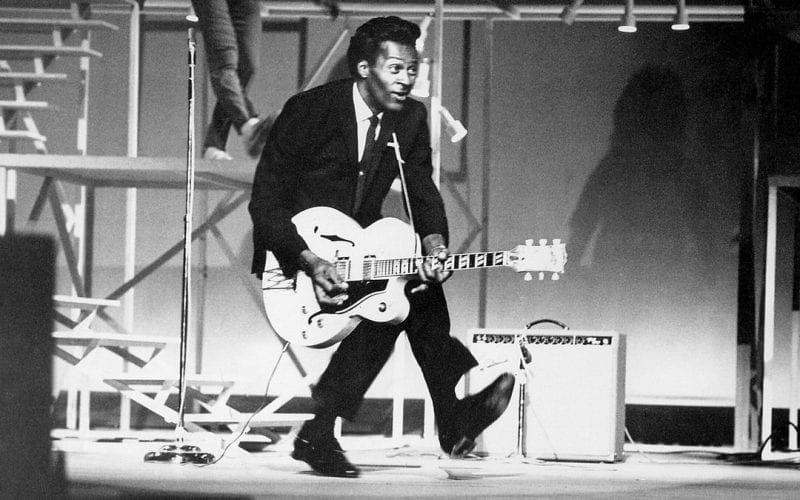 Chuck Berry invented rock guitar as far as I know.  The lead solo on “Maybellene” predates Scotty Moore’s stuff with Elvis by a good year or so.  The classic Chuck riff that so many rock songs are based on is the one that makes your leg move to the beat uncontrollably.  It is the one that adds the roll to the rock literally creating “rock” and “roll.”  Some say he got that riff from what Johnnie Johnson was playing on the piano when he joined Sir John’s Trio (which he reshaped with Johnnie’s blessing after Johnnie saw the great potential in the band with Chuck as a new leader).  If so, then Johnnie Johnson should be given way more kudos than he’s ever received, as he was overshadowed by other hot dynamic front men like Little Richard, Jerry Lee Lewis, etc.

As Jon Pareles put it so eloquently in the New York Times today, “While Elvis Presley was rock’s first pop star and teenage heart-throb, Mr. Berry was its master theorist and conceptual genius.  The songwriter who understood what the kids wanted before they knew themselves.”  Those fantastic lyrics of his, captured the culture like no other.  “Well there she is again standing over by the record machine.  Well she looks like a model on the cover of a magazine.  But she’s too cute to be a minute over seventeen.”  Come on!!!  “She’s too cute to be a minute over seventeen”—that’s f*cking genius and that’s only one line of one song. The title and song “Roll Over Beethoven” was an anthem that announced rock to the world and is as important as Bob Dylan’s “Times They Are Changing” sentiments. He even invented his own brand of street talk with words like “motorvatin’.”

I met Chuck at my first Grammy Awards in the very early ‘70s.  The ceremony and show was at the Hollywood Palladium.  Those were fun days in the music business, you could walk around and freely meet anybody and everybody because the room was so intimate.  I had learned how to play rock guitar listening to Keith Richards on early Rolling Stones albums. Then I learned that those riffs weren’t Keith’s at all, they were Chuck’s!!  By the way, Keith never tried to hide that fact and has always given Chuck credit—“I am a disciple of Chuck Berry.”  Anyway, I saw Chuck, ran over, and couldn’t help myself—I just gushed and words came flying out of my mouth.  “Chuck, hi, you don’t know me, but I play soooooooooo many of your licks!!!”  I thought he’d be happy that what he’d invented was being passed down to another generation.  But he wasn’t, in fact he was bitter.  He looked down, glared at me, and in a very sarcastic tone said,  “They do go around, don’t they?!!”

At first I was taken aback but then I began to put two and two together.  Imagine you are Chuck Berry and you invent rock guitar, write so many great songs that define the culture of the day—teenage love, car songs, dance party songs, etc., etc., and then you watch white groups like the Beach Boys and the Rolling Stones (just to name a couple from the tons of artists who copied him) get all the credit, and make all the money!  Wow, that must hurt like you can’t stand and would make anyone bitter. In fact, if you watch the documentary Hail! Hail! Rock ‘N’ Roll which I highly recommend, and for which Keith Richards is the musical director, you will see Chuck mercilessly torture Keith—“If you’re gonna copy me, do it correctly!” He shouts as he makes Keith play a riff over and over and over again until he does it exactly like Chuck. It’s painful to watch but you can see Chuck’s bitterness and hear the anger in his voice, making the point for all the world to see.

In the end, Chuck did not become a superstar nor make superstar money.  But anyone who knows music knows who the King really is!

Here is Chuck from “Hail! Hail!” with an all-star band fronted by Keith Richards along with The Stone’s Bobby Keys on sax.

“Back In The USA” with Linda Ronstadt:

“Johnny B. Goode” with Robert Cray and Julian Lennon:

I also recommend you dig out the album “The Great Twenty-Eight” and blast it all day long! That’s what I’m gonna do!

Hail, Hail To Chuck Berry — The King Of Rock And Roll!!

PS. Last year, I finally found the best guitar I’ve ever owned.  It’s a fab Gibson Custom Shop VOS ’59 Les Paul.  Two months ago my wife named it “Maybellene.”  I thought at the time, what a perfect name–it takes on a much greater meaning today.

In this article: Chuck Berry
Published in: Backstage Access, Spotlight