To our generation the music meant everything.  We didn’t have computers, smartphones, and tons of cable TV shows to entertain us.  The music took center stage and the messages from that music helped shape our lives.  It is a generation of music lovers who not only knew the hits but who were also familiar with deeper album tracks of the popular stars.

And beyond that, many of us followed the careers of bands and artists who were not known on such a wide scale as the Beatles and The Rolling Stones.  Bands like Procol Harum, The Mothers of Invention, Emerson, Lake & Palmer, Nazareth, Judas Priest, Blue Oyster Cult, Motorhead, Uriah Heep, King Crimson, The Kinks, The Flying Burrito Brothers, etc., might have a Top 40 hit or two but most of their music was heard solely on FM radio and they built their fan base by touring.

Leslie West might be considered one of those “lesser widely known” artists.  His bands Mountain and West, Bruce & Laing certainly had their share of fans, but for some reason, Leslie just never rose to superstar status.  Make no mistake though, as a guitar player and with those bands, Leslie West is seminal to the rock culture.

In case you have forgotten, crank this up.

I have included both versions because the original studio version is, frankly, a work of art. The perfect rock track from beginning to end.  In an interview with Guitar Player magazine last year, Leslie said, “…the song has just everything you need to make it a winner.  You’ve got the cowbell, the riff is pretty damn good, and it sounds incredible.  It feels like it wants to jump out of the car radio.  To me it sounds like a big thick, milkshake.  It’s rich and chocolatey.  Who doesn’t love that?”

The live version, performed with a reformed Mountain, shows-off Leslie’s effortless and powerful guitar prowess.  And for any guitar players out there who want to learn the song as Leslie plays it, here he is on YouTube to teach you personally.

Over the years, Leslie West has had a very big influence on many rock guitar players.  A contemporary of Eric Clapton, Jimmy Page, and Jimi Hendrix, Leslie was respected for his versatile playing, his guitar tone, and his ultra-heavy power-chords.

Eddie Van Halen once told Rolling Stone magazine that Leslie was one of his biggest influences.

Pete Townshend wanted to replicate Leslie’s sound so badly on one of the Who’s albums that he had Leslie send over to England his Les Paul Jr. guitar and the small amp he was using to create that sound.  In fact, Leslie contributed some parts to the original mixes of the Who’s Who’s Next album.

If you want to know how much Leslie was revered in his circle of musicians, Felix Pappalardi, bassist, vocalist, and producer, who amongst other records produced many of Cream’s great albums, agreed to join Leslie in his band Mountain because he saw such great potential there.  The idea was to create a band with a sound even heavier than Cream.

Cream bassist, Jack Bruce, thought so much of West that he joined Leslie in creating the post Mountain band West, Bruce, & Laing.

Here is Howard Stern explaining some of this and remembering his buddy, Leslie West.  At the end of the interview footage Leslie sings Bob Dylan’s “Blowin’ in the Wind.”  His vocal performance will give you an idea of how powerful his voice was, an equal to his guitar sound.

I personally met Leslie when West, Bruce & Laing were signed to Columbia Records.  He was a very funny and fun guy to hang with.  And he always told it like it was, with no filter.  He told me that when he was growing up and beginning to feel his oats as a guitarist, he heard Eric Clapton.  Being competitive and desiring a big career, the first thing he thought of was, “Now I have to get past this guy?!!”

West told the L.A. Times in 1990, “The thing that most impressed me when I started was how, with Clapton, you could identify his sound like a signature.  I wanted to have a sound you could identify like that.  I was never a speed player.  I tried to capitalize on my vibrato.  I hope I’m regarded as a melodic guitar player, not someone up there going ‘weinie, weinie,’ all night long.”

Knowing I was a guitar player myself, Leslie continually teased me.  Every time we’d meet, he’d start out the same way.  In that big growly voice he’d bellow, “Hey Rap, wanna jam?!!”  At the time I wasn’t good enough to take him up on his offer — too bad, today it would have been fun.  We got along great and he always invited me backstage to his private dressing room.

Once at a big show at the Hollywood Palladium I walked in, said hello, and spied a slight built unshaven fellow with a boy ’ish face walking towards me from the corner of the room.   Leslie very nonchalantly introduced me.  “Hey Rap, by the way, this is Keith Moon.”  I was stopped dead in my tracks.  Not only was I a huge Who fan, I regarded Keith Moon (“Moonie” to his mates) as the greatest drummer in rock and roll — even beyond Ginger Baker from Cream.  I was at a complete loss for words.  The only thing I could do was parrot Leslie, “Hi, ‘by the way,’ I’m Paul Rappaport from Columbia Records.”  We smiled and shook hands.  Then Ian Hunter, from Mott The Hoople walked in.

Hunter and I had been buddies since I first started with working with Mott in 1970, so everything was pretty chill and we all had some yucks together.  Mott The Hoople was opening for West, Bruce & Laing that evening, and Leslie had asked to see Ian’s renowned stage guitar, whose body was made in the shape of an “H.”

“Let me see that thing, I’ve always wanted to try it.”  Leslie plugged the guitar into a little practice amp and started riffing.  Within thirty seconds he stopped, and in his non-filtered gravelly voice, announced, “Hey, this guitar plays like shit!  It’s awful!!”  Looking at Ian, “How do you play this thing every night??!”  Ian sheepishly replied that it was only a “stage” guitar, mostly for looks.  In the glam band world, which Mott was a big part of, that kind of show guitar made sense.  But obviously not to Leslie, who was a guitar player’s guitar player.

Having two major acts sharing the same bill in Hollywood, I planned one of those legendary after show parties that you may have heard or read about.  I hired a food artist who built scenes from New York out of food.  He built the Brooklyn Bridge using cheese strings as the suspension cables.  There were huge ice statues.  When the invited music industry guests walked into the room their mouths dropped open — people would be talking about this party for weeks.

The oddest thing was, the next day when I had breakfast with the manager, Bud Prager, he complained about the party.  Actually, he had been complaining to me all week which is a whole other story for another time.  Suffice to say, I think something else must have been troubling him in his life that was bleeding over into his daily persona.  At any rate, I asked him what was wrong — everyone at the party seemed to be having a bang-up time, not to mention how bowled over they all were with the food décor.

He said, “Yeah, yeah, but these guys are from New York, they don’t want string cheese and fancy fruit.  They want corned beef and pastrami.”  I still don’t know if the guys really cared that much or if Bud was just giving me another hard time, but my only counter was that it was a “Hollywood” party created to blow everyone in the L.A. music industry’s mind and get them talking about the overall event, both the concert and the after-party.  And, mission accomplished.  The next request was priceless.

“Next time, I want you to have an entire separate table of food set up.  Because one of Leslie’s favorite things to do is to pick Keith Moon up and throw him across the room into a giant table of food.  And Moonie loves it!”  Ahhh, the good old days of rock and roll. 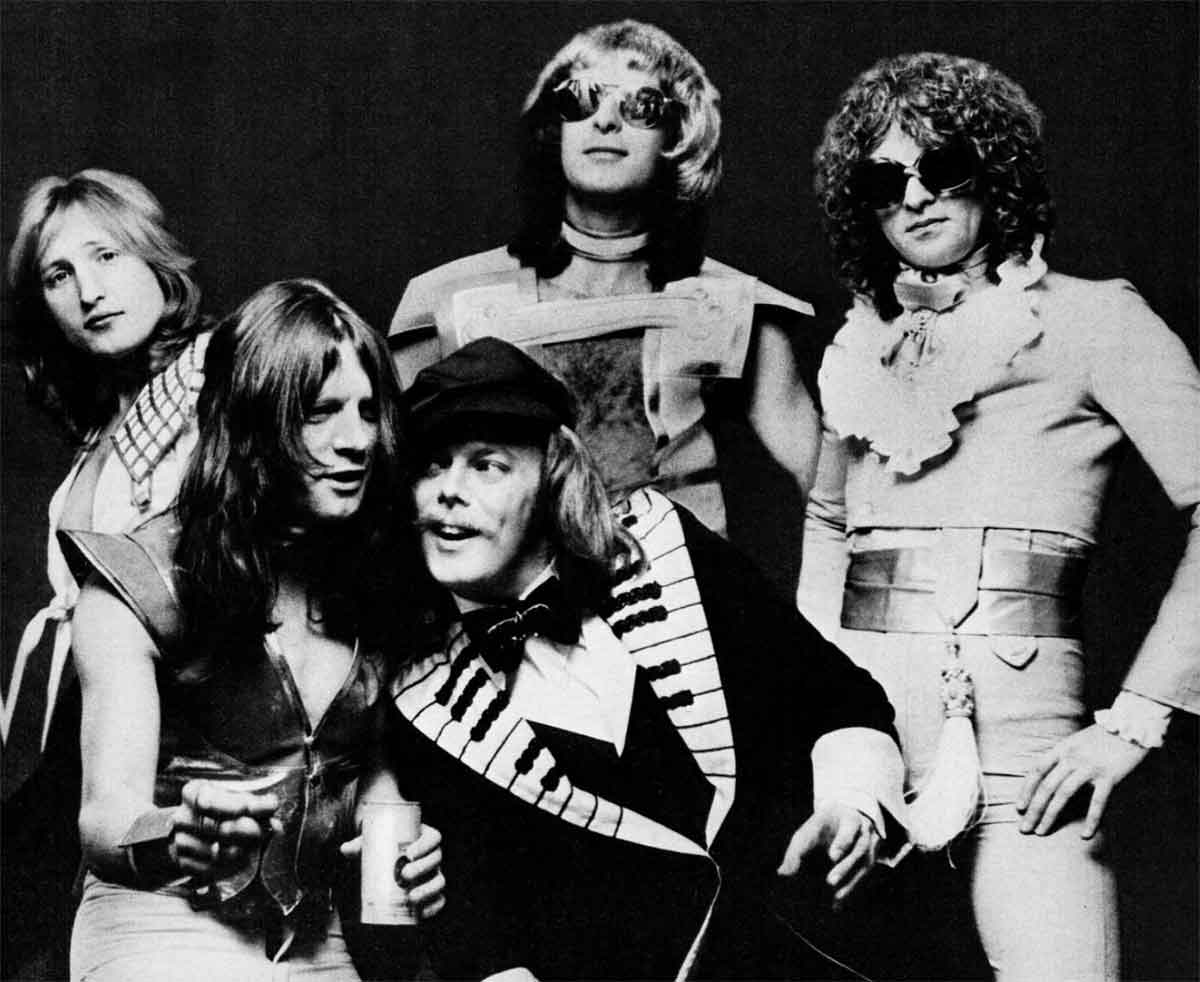 I was recently speaking with my old friend and colleague Rich Totoian who worked closely with Leslie as part of Bud Prager’s management company.  He reminded me of two funny stories.

Remember the “rich and chocolatey milkshake” sound of “Mississippi Queen” that Leslie referred to?  Well, apparently Leslie had a thing for milkshakes and his favorite was a chocolate malted milkshake, commonly known in New York as simply, a “malted.”  On the road with Mountain in London, Rich was sharing a hotel suite with Leslie.  One very late evening having the munchies due to taking some Mandrax (England’s version of a Quaalude) given to them by Keith Moon (who else), Leslie called down to room service asking for a malted.  They didn’t know what the hell he was talking about.  Frustrated, after room service closed, Leslie and Rich went downstairs and raided the room service kitchen looking for stuff to make their own milkshakes.  Not being successful they absconded with a giant chocolate cake and some other goodies to hold them over until the next day.  That next morning Leslie visited the kitchen chef (who by the way, was looking for a missing large chocolate cake) and taught him how to make a proper New York chocolate malted milkshake.  “So, the next time I call down and ask for a “malted,” this is what you guys need to do — thanks.”  Leslie West, ambassador for cultural exchange.

Rich also reminded me of the time that Leslie was in Bud Prager’s office with one of Bud’s partners and his own personal manager, Gary Kurfirst.  The management team were launching a new band on their own record label and Kurfirst told Leslie he’d hatched a great promotion plan.  The plan was to give this new band’s album to everyone in the music industry, except for the press… to supposedly create “mystique.”  Leslie, who I’ve mentioned was a very funny guy and also very clever, looked at Gary and said, “Well, there’s ‘mystique’ and there’s ‘mistake.’”

The story of Leslie West wouldn’t be complete without me letting you know that even though his music was most popular in the 1970’s, a live version of his Mountain song “Long Red,” which has a drum beat played by Mountain’s original drummer N. D. Smart, has been sampled many, many times over by contemporary artists like De La Soul, the Game, ASAP Rocky, Kanye West, Jay-Z, and more.  It’s interesting to note, that beat was played long before hip-hop was ever even invented.

Leslie West is truly a legend.  I leave you with one more interesting interview of Leslie talking about Felix Pappalardi and how Mountain came together, followed by one of my all-time favorite Mountain songs, “Theme for an Imaginary Western.”

“Theme for an Imaginary Western”  – Mountain

Leslie West gave us some unforgettable music, but what I will mostly miss about him is his larger than life, super amped fun, New York personality.  What a great guy.

In this article: Leslie West, Mott The Hoople, Mountain, The Who
Published in: Backstage Access, Features