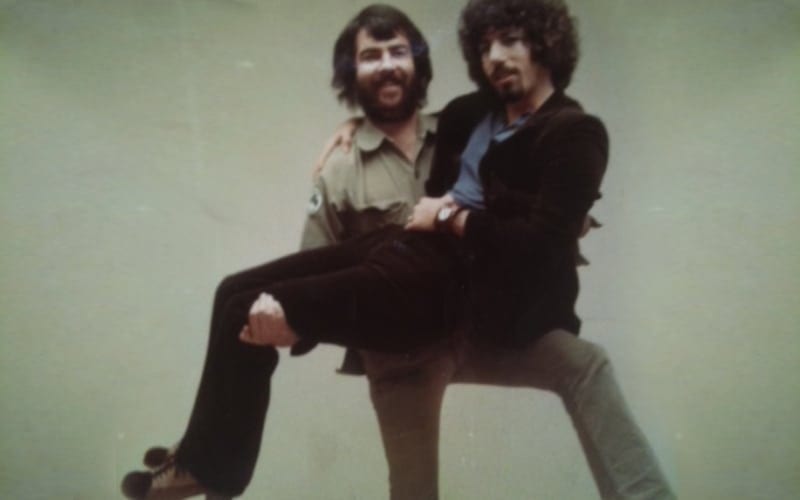 The early 70’s in the music business seemed like one long party. It’s not that we didn’t do our jobs, it’s just that everything seemed very loose and carefree while we were doing them. We worked hard for sure, but then there would be an afternoon game of bowling in the hallway — stuff like that.

The photo you see is of me dressed in my London brown suede suit made up with eye shadow and blush getting ready to promote the glam rock band Mott The Hoople. The guy carrying me was Columbia’s head of publicity at the time, Michael Mahoney.  I love the photo because it really captures how we were in the early 70’s.

At that time, a new format of “underground radio” on the FM airwaves was growing in popularity and playing new rock music that was just exploding everywhere.  Jimi Hendrix, Rod Stewart, Pink Floyd, The Rolling Stones, The Who, Bob Dylan, Santana, could all be heard on these radio stations, even if they didn’t have a top 40 hit record.  This meant more exposure for new up-and-coming acts like Billy Joel, Bruce Springsteen, Elvis Costello and so many more who’s careers could grow without the need of a top 40 hit single.  These artists had their own hits on the FM format.  It seemed like every week a new artist would emerge.  The record companies couldn’t press the records fast enough and everyone was making money hand over fist.

The business of selling records was a modest one before this musical renaissance took place.  Large labels like Columbia and Warner Brothers did well with artists like Frank Sinatra, Andy Williams, Ricky Nelson, and selling popular sound tracks to hit Broadway shows but they were not ready for what was about to take place.

This industry boom felt like the Gold Rush days, and in every field hiring was ramping up, and at a very quick pace.  I think the most interesting thing about that time was, because the music was coming from a new generation of young people who had their own culture and counterculture to boot, it was that generation of young people who were the ones in demand for these jobs–these were the people  who understood and lived the music and the culture of the day.

So the “Mad Men” from the 50’s were now hiring mostly longhaired hippy types who arrived with 60’s vibes and mores.  This meant that a lot of the industry was being turned over to some very colorful and creative characters.  On top of that, because so much money was being made not too much attention was being paid to conventional business wisdom.  In short the inmates were running the asylum!

Hiring in the early 70’s music industry could be on the up and up, or it could get very “creative” like this:

One day a fledgling disc jockey named Jim Monaghan came to the big rock station in New York, WNEW FM to interview for a job.  He brought his audition tape on a cassette to play for then Program Director, Richard Neer.  They met in Neer’s office.

Richard: “Hi Jim, nice to meet you, I’ve heard good things about you.”

Richard: “Do you play baseball?”

Jim: “Yes, and I’m actually pretty good at it too.”

Richard: “Can you play center field?”

Richard: “Awesome!  Our WNEW team is very competitive and we NEED a center fielder!”  You’re hired!

Jim: “What about my audition tape?”

The sales force at CBS Records was notorious for their heavy drinking.  This meant late night partying and ultra heavy hangovers the next day.

One of our most famous sales branch managers was a guy named Dave Swengros.  Dave was in charge of the Atlanta Branch offices and oversaw all the salesmen, the point of purchase display people, and the local promotion managers who brought the records to radio stations for airplay.

One day a very colorful character who went on to be legendary in the business came in to interview for the job of Columbia Records Local Promotion Manager, Atlanta.  His name is John Fagot and over the years has become a great friend to many of us.  John, whose personality is larger than life, walked in with his then popular bellbottom pants, big platform shoes, a jacket and his trademark—a very wide, and colorfully loud, outrageous tie.

John sits down in a chair across from Dave who’s sitting behind his big desk.  Dave starts the interview–Fagot is feeling very woozy from his own partying the night before.  After a few more questions John starts looking around nervously, spies a potted plant next to his chair, looks up at Dave and says, “Please excuse me.”  He leans over, pulls the planter close to him, and throws up in the planter!

“So sorry Mr. Swengros.  I had a late one last night and…”

Dave looks at John, sees a great kindred spirit, interrupts waving his hands, and exclaims with a knowing smile–“YOU’RE HIRED!”

I remember being ultra careful with the people I hired over the years but my priorities weren’t so much about a person’s business abilities as much as their people skills and their love for the artists and the music that we were working with.

In the 80’s when I became a Vice President at Columbia I was looking for a new assistant.  I interviewed over 25 people, both men and women.  Some had great typing skills, others were fabulous at spreadsheets and working with budgets, others were very savvy about the inner workings of the label, but the person who won the job did not possess any of those skills.  Her name was Rasa Alksninis, she was Lithuanian, seemed to possess a deep beautiful soul, and was very up on the new music of the day.

What sealed the deal was during our interview she spotted a cassette on my desk with the name Chris Whitley.  We were looking to sign Chris who was an incredible blues/rock singer songwriter.  He was also noted for playing slide on authentic Dobro guitars.  At the time not many people knew of him, he had a small following of fans in Greenwich Village where he’d play out.

“How do you know about Chris Whitley??”  I was kind of shocked.  She said, “I like a lot of the new music that’s being played these days and I go to the Village to check out new artists.  Chris is one of my favorites—he’s really good!”

Of all the skills in the world this meant more to me than anything.  The fact that Rasa was a music fan and moreover so hip that she was wired into the new underground music scene.

Rasa went on to learn everything in the music business she would need to know and eventually became a producer for The Columbia Records Radio Hour series and also ran the Pink Floyd blimp program.  She was one of those special ones who make things work and also in a very easygoing manner–everyone loved her.

So there you have it, a glimpse of the early 70’s, how the music business worked then, and how even years later, creativity and the love of music could easily be rewarded beyond usual day to day business skills.

Hope you are all having a rocking summer!