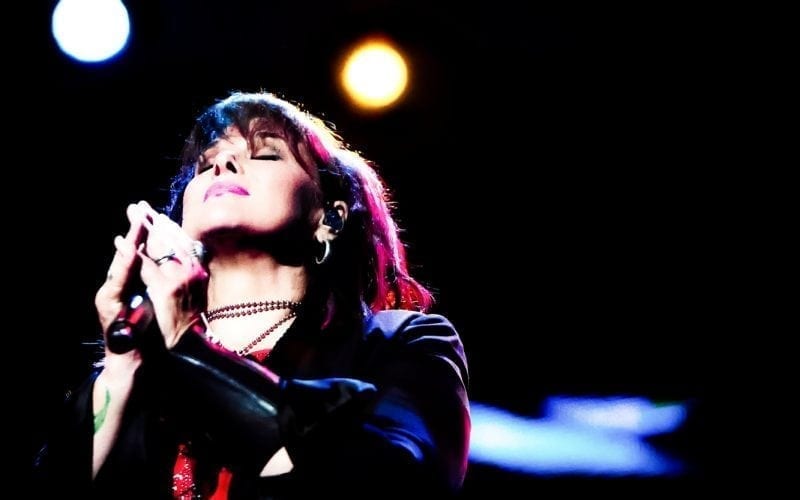 Ann Wilson is a serious rocker through and through and always has been.  Anyone who has been to a Heart show knows this.  But I believe during the band’s storied career that their overall image, much like Journey or Billy Joel’s, has been a bit misconstrued to seem like they are more pop than rock.  Of course, that has to do with the songs that become Top 40 hit singles and the production of those songs.

It’s interesting to see how public perceptions can change as rock performers  achieve Top 40 success.  As I say, I saw it happen with Journey and for years in some circles, Billy Joel got (wrongly) slagged as a “lounge singer.”  This came about because like some other artists, although his albums had plenty of rock songs, Billy’s big hit singles were all ballads.

I had the pleasure of working with Billy from his very beginnings at Columbia Records and had a devil of a time convincing rock radio to play Billy’s records because of this misconstrued image of him.  The only way I could convince the rock radio guys and gals to understand Billy’s true nature was to take them to see a show.  Upon seeing a lively spirited rock band with drummer Liberty Devito as the powerful engine driving the band to some very frenetic rockin’ places, you couldn’t help but want to get up and dance, and Billy’s voice and piano playing became rowdy and rockin’ during songs like, “Miami 2017,” “Pressure,” “Angry Young Man,” “Only The Good Die Young,” and more.

I only mention this for those who have never seen a Heart show.  I could imagine your views of Ann and Nancy Wilson might also skew pop even though plenty of their songs were played on rock radio.  I truly believe this is one of the reasons it took them so long to get into the Rock And Roll Hall Of Fame.  Indeed, when Classic Du Jour’s Judy Libow and myself were actively promoting a new Heart release in 2010 and attended a Heart show at Madison Square Garden, I immediately was incensed that these two gals had not yet been considered for the Rock Hall.

Yes, they played their hit ballads, but make no mistake, this was a ROCK show — Nancy played some blazing electric guitar passages and Ann’s voice, well, she is a POWERHOUSE.  They closed with a Led Zeppelin cover song that was soooooooooo good it actually rivaled the originals.  The show was so powerful I was moved to send an impassioned letter to an old friend who sits high on the board of The Rock and Roll Hall Of Fame, insisting that they immediately focus on Heart for the next year’s inductees, as perhaps some of the Rock Hall board members had never seen  Heart live, and did not realize how rockin’ Heart actually are.  I would like to think my prodding helped move the process along, but in any case the gals made it into The Rock Hall in 2013.

Ann Wilson has been an iconic rock singer for a very long time and on her new album Immortal, she certainly pays homage to her rock roots, but the big surprise is she has also moved forward creatively, pushed the boundaries, and spread her vocal wings to places I had no idea she could go — think blues, jazz, dark, light, think Amy Winehouse, think Broadway, and all done with an authentic new found voice of her own.

The press will use the obvious hook about this album–it is an album of cover songs by artists and friends who have influenced Ann and who have passed away in recent years.  But in this reporter’s opinion the major story here is Ann’s voice and the treatment she brings to each track.  Ann Wilson has gone to another place—better said, other places and the amazing vocal performances far surpass the idea of the album itself.  If you can do that (given the songs are by iconic artists in their own right) you’ve really got something special.  And believe me, this album is really something verrrrrry special.

On the first track Ann pays homage to her rock roots, and her version of  “You Don’t Own Me” will absolutely blow you away.  The music starts with an open that sounds like a Black Sabbath track from the 70’s.  Guest artist, Warren Haynes’s guitar work is heavy, very impressive, and when Ann’s voice comes in, it’s absolutely scary.  This track reminds me of Vanilla Fudge’s version of “You Keep Me Hanging On”—sumptuously heavy metal ‘ish, and Warren’s solos at the end are just stellar.  Hooray for Les Paul guitars, that’s all I can say.  My Stratocaster brethren will get on me for that one, but hey, you can’t do that with a Strat, just sayin.’ 😉

Here is Ann on the Jimmy Kimmel show performing the song.  It’s hard to make rock work on TV, but I was hypnotized watching this:

The second track, a cover of Audioslave’s “I Am The Highway,” shows off a new side of Ann’s voice.  I find myself listening to this track over and over again just because I love the vocals so much.  And this is where you begin to understand that Ann is about to stretch the limits on this entire album.  As much a powerhouse rock vocalist and incredible front woman that she is for Heart, Ann Wilson is about to take you on a vocal journey, and as I said, will seriously transport you to other places, as it obviously did her.  And if you think you appreciated her talent before, just wait.  On Immortal Ann has totally reinvented herself, and in the most wondrous of ways.

The third track, Ann’s take on Tom Petty’s “Luna,” has a seriously great groove and again Warren Haynes shines brightly here.  I am a Warren Haynes fan, and it is worth pointing out that while he can really let it go when he records his own records with Gov’t Mule, on this album in key spots he has chosen to play less with more meaningful and expressive notes.  It is a side of Warren I have not experienced before and I love it—total taste through and through.  Ann’s vocal is alluring, fitting snugly in the groove.

Another fave of mine is “Politician,” largely because I’m such a Cream fan and Ann nails it going back to the powerhouse rock vocal experience.   Haynes pays homage to some of Eric Clapton’s signature riffs (which will delight fans like me) and towards the end he just lets loose and takes us to the Never-never Land of guitar riffs.

And just when you think we might be headed back towards more rock, we hear Ann’s version of Leonard Cohen’s “A Thousand Kisses Deep.”  The recording is theater of the mind and we feel like we might be entering a small coffee house, or bar.  The musicians totally capture Leonard’s touch and feel, and then that smoky voice appears and we experience yet another side of Ann Wilson.  I am a huge Leonard Cohen fan, and this track and vocal performance really moved me—just beautiful.

So then you think wow, how do you top that?  And then the following track is Amy Winehouse’s “Back To Black.”  The vocals are wonderfully dark, sung with a ton of angst and soul, you are mesmerized by Ann’s vocals, and yes the song tops the one you just heard!

George Michael’s “A Different Corner” sounds like it could be a Broadway hit show tune, and the album comes to a close with Gerry Rafferty’s “Baker Street.”  Again, Ann puts her own feeling and spin to the lyrics, which for me made the song an entirely new experience, and in many ways much more powerful than the original.  But that’s what you hope an artist can achieve when making an album of cover songs.  And boy, did she deliver!!  And that unique Ann Wilson rock voice, which is now in our collective DNA’s, returns at the end of “Baker Street.”  It makes for a nice symmetrical button at the end of the album and reminds us all why we love her so much.

WOW!  That’s all I can say.  There are other tracks on the album that you will enjoy as well, like the Eagles “Life In The Fast Lane” and David Bowie’s “I’m Afraid Of Americans.”  You will discover an entire album’s worth of great material and vocal performances that will keep you glued to your seat, listening over and over again.

Here is a personal message from Ann:

I am proud to announce my new album, “Immortal.”  It’s not a tribute, but rather a chance for me to honor these great artists…to thank them for their messages they left while they lived.

Mike Flicker (Original Heart producer; Dreamboat Annie, Magazine, Little Queen, Dog and Butterfly, Bebe le Strange, etc.) is working with me on this new album.  It has been a wonderful experience for me because I’m not only singing but directing too.  I am able to see the project grow from an idea to a finished song, with no compromises to the original vision.  My team and I are not holding back, and you can expect the unexpected on the tracks.  The album is a collection of songs by artists who have departed in the last several years: David Bowie, Chris Cornell, Tom Petty, Glen Frey, and Amy Winehouse to name a few.  These artists may have left their bodies, but their souls and craft live on today.

In addition to the album, you will be able to hear many of these recordings live at future Ann Wilson of Heart tour dates in 2018 and a live concert special later this fall on PBS.  It has been a thrilling endeavor, and I can’t wait to share with you in the coming weeks.

In the art of music world it doesn’t get better than that folks.  Congrats to Ann Wilson on a spectacular achievement.

Keep rockin’ out there!

In this article: Ann Wilson, Heart
Published in: Backstage Access